The alcohol industry has come a long way with inventions of trendy concoctions throughout the years, following the trend now the company Kingfisher announced the release of its brand new Kingfisher beer powder. Instant beer is something which hasn’t been introduced in India before, the social media erupted into discussions and controversies.

One section is questioning it’s authenticity, whereas the other ones are treating it as an April fool’s prank as it was introduced on 30th March 2019. Kingfisher is a renowned brand and has been producing magnificent bear since 1978, but is this some kind of a new trend they want to popularize or just a prank!

Beer is an emotional attachment for many people mostly man, but will Kingfisher instant beer be able to fulfill the requirements of actual beer? But the concept is surely magnificent, instead of getting up to purchase bear you can just mix the Kingfisher instant beer powder in chilled iced water and ‘Voila’ you have a mug of beer. 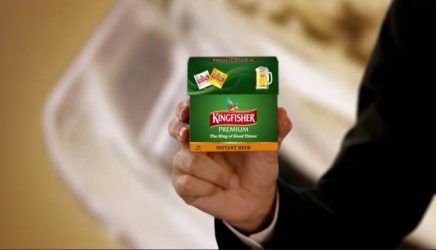 Kingfisher believes that beer is something that should be enjoyed anywhere at any time. And that is why they invented this concoction, with this you can make beer at any time and anywhere with just only two steps.

The whole campaign constructed and broadcasted by Kingfisher was a malicious joke, an April fool’s prank.

People were exhilarated after discovering such an interesting invention was about to be introduced to the market but was extremely disappointed to find out later that all of that was a prank.

The Kingfisher company even developed a microsite dedicated to this product, which generated about 34,000 registrations to their website which was specially developed for people applying to receive the honor of first exclusive test testing of this miracle product. It instantly became trending on WhatsApp and Facebook as the YouTube video received 70,000 shares within 48 hours across all social platforms.

How was Kingfisher able to convince such a large number of people?

Instant beer is very real. Firstly, it was made by mixing the carbonated powder into chilled water. The creation is carbonated water. And when the fizzy H2O is thoroughly mixed up then it is time to add the powdered beer. The beer powder is actually the magic, it is developed by a special freeze-drying process which helps separate both the liquid and solid matter of beers. And as is made by fermentation, all that is left after the process is water and fermented matter.

So technically when you put the dry beer powder with water you receive the same liquid, which is beer. According to the campaign launched by Kingfisher, it advertised that this concoction tastes exactly similar to normal Kingfisher beers. And the advertisement video showed that there would be two sashes, one will contain carbonated powder and the other the freeze-dried instant beer powder.

The jig was extremely realistic with proper advertisement and even a microsite which almost convinced people to consider it’s existence. Several viewers asked different kinds of questions such as what is the alcohol content of the product? where will it be sold? what will be its price range? Will it is exactly similar to the original product or will there be any kind of difference? The campaign was an instant success and in the end, received a million views.

Why was it introduced, was it a conspiracy!

The instant beer powder Kingfisher was excellent marketing propaganda that was cooked up by the company Kingfisher to instantly boost up its popularity. There were certain circumstances involving Vijay Mallya and Kingfisher which tarnished the company’s image and had a major negative impact on the financial condition of the organization. Although United Brewery (Kingfisher) was still popular its previous status had a crack on it due to the scandal.

The prank of instant beer powder was introduced in the market in 2009 by KegWorks through an elaborate definition of its manufacturing process. The explanation by them goes like this, instant beer powder was first developed by a team of German scientists and sold by KegWorks, and it cost $7.95 for 12 packets. But till now there hasn’t been any authentic news of the introduction of beer powder mix within the worldwide alcohol industry.

This propaganda of Kingfisher has made people ponder about the existence of instant beer Kingfisher, and will it possibly be available in the future or not. This could be the seed of a major revolution in the alcohol industry altogether. The propaganda may have been introduced to judge the reaction of people, and how they will accept this miracle discovery.

The social media went haywire with the introduction of such an invention, someone questioned it and someone criticized it, but everyone was curious about it. The Kingfisher company was very persuasive about their advertisement strategy of the Kingfisher instant beer powder, they commented that the primary advantage of this discovery is that the product is extremely easy to store and transport. Beers are very much different from other forms of alcohol, and mostly for parties or other gatherings, you have to buy crates of beer rather than just bottles. And the Kingfisher company utilized this specific condition as a marketing tool and advertised their superficial instant beer powder-based a portability and easy storage.

They also went on to comment that a product as excellent as beer doesn’t deserve to be bottled up, it should be free from all kinds of packaging so that it can be carried around easily. They also mentioned that it is their responsibility to introduce breakthrough innovations into the alcohol industry to keep its clients and customers satisfied. The campaign was successful enough to convince most people about the credibility of Kingfisher instant beer powder.

Many guessed that it could be a prank as the news was disclosed on 30th March 2019 and the launch was supposed to happen on 1st April 2019. But the thing which made it more suspicious that it was introduced right after the weird advertisement of glow in the night burger by McDonald’s. As expected the existence of the prank was made public on 3rd April 2019 which crashed the dreams and expectations of more than a million people. People complained, and called it a plane cruel prank,  some of them even suggested that they should start developing the Kingfisher instant beer mix as it is an excellent idea.

People were heartbroken after learning that there wasn’t any Kingfisher instant beer instead it was just a prank. The comments under the official video were extremely emotional, which showed that Kingfisher was successful in attracting the attention of people towards their brand.

Indian citizens are now expecting Kingfisher to introduce the real product in the market, but according to worldwide research, the availability of instant beer powder in the general market all over the world is still quite a long way in the future. Although it has already been invented scientists are still putting additional effort into the result to create a perfect replica of normal beer. The alcohol content, flavor and taste of the current invention is still far from what the actual product tastes like. So India still needs to wait for years to have a taste of the instant beer powder by Kingfisher.

But as the product was a hoax there wasn’t any concrete Kingfisher beer powder price in India. Kingfisher beer powder cost is not certain yet, similar to its existence. Authentic breweries such as Kingfisher may never actually introduce instant beers as it might kill the market for actual bear. Generally, beers aren’t extremely expensive but it can change in case of instant beers. The manufacturing process could be complicated and also expensive, though the whole thing is pretty convenient Kingfisher instant beer price can actually be heavier on the budget.

The current marketing of instant beer powder by Kingfisher has some significant potholes which need to be rectified if they seriously want to achieve this milestone. Most importantly how much water can be used for one sachet? how and where will it be marketed? The Kingfisher instant beer price in India? And will it bring out the exact taste of authentic Kingfisher craft beer? Only after overcoming these obstacles will Kingfisher be able to establish the perfect instant beer powder.