Before you lift the pint of your favorite beer, have you taken a moment to think about the calories in beer or regarding the average alcohol content of beer? Do you want to find out? In this blog, we are presenting the top 50 beer alcohol content list.

This list will help the readers to make a better choice of alcohol consumption.

There’s no wonder people have different beers as their favorites. Sometimes they prefer drinking light and sometimes the strong ones. But have you ever thought what makes them light or strong? It’s the difference in their alcohol and calorie content.

Through this source of information, you will learn about worldwide beers in the context of abv level, carbs, and calories. Among many consumers, the use of alcohol can go unlimited.

It can be harmful. However, consumers mainly forget to concentrate on important beer factors. Without a doubt, beer taste is important. But, here you will find other significant elements.

You might be shocked to see some results. But beers aren’t as light as we always thought them to be. Here, the different beer alcohol is not mentioned to criticize any brand.

As per medical experts, it is recommended that you should know to what extent alcohol percentage in beer should be consumed? When you’ll be having an idea about how many calories are there in a beer, you’ll plan your course of drink accordingly.

Health should always be a priority and you can maintain it well by going through this beer alcohol content list. Start from the beginning and reach till the end, taking halts at the beers you prefer drinking and upgrading your knowledge about the calories in it and its ABV. That’s how to plan your drink smartly!

Beer alcohol content list may confuse you upon what makes beer high-quality and low-quality. Well! The question is very usual. But, the answer is quite complex.

In some countries, the highest alcohol beer content marked as high-quality beer. In other countries, the quote is reversed. To understand this concept, let’s take a glimpse of the benefits and effects of the average how much alcohol is in beer.

Note: “Average alcohol content of beer” can be considered high among some drinkers, country-wise. Thus, take the following benefits and effects in concern of alcohol content beer only.

Generate immunity against Cold: Kids are generally given 1-2 tablespoons of brandy in the winter season. It is because it helps them to overcome cold and cough. 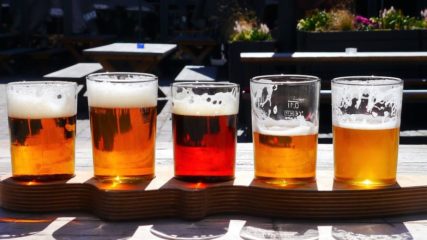 40%.” However, brandy is not comparable to beer.

The highest alcohol content domestic beer valued at 65%. It is quite simple that ginger beer abv is safe for kids. It prevents the generation of cold. The technique comes from 1993 and has not harmed anyone yet.

Reduces the risk of Dementia: Memory loss is common among the elder’s generation worldwide. Alcohol allows the damaged brain cells to self-cure. It improves the blood circulation and respiratory system. Thus, the import of oxygen to the brain remains normal.

Avoids the risk of Type-2 Diabetes: The myth “alcohol causes diabetes” is logically false. An alcohol consumer with favoritism for corona drinks one to three glasses of it daily. The statement may sound unhealthy, but studies say “corona beer alcohol content is 4.5%. It is an average limit.

It is noteworthy to mention that the risk of type-2 diabetes is more among the non-alcohol drinkers than the Corona drinker. Why? Average beer alcohol balances the sugar level in the body and ensures that it metabolizes during alcohol digestion by the liver.

“What is the typical alcohol content of beer?” could be the next question for the consumers to make the right choice. Beer may contain 3% abv to 70% abv depend on production. Modelo abv limits to 4.4%. It is considered a healthy percentage.

Brain cell damage: The quote “everything is good up to a limit” applies here. Although average beer alcohol content prevents the brain from falling into depression and anxiety, there’s another side of the coin.

BAC higher than 0.35% can lead to the death of the alcohol consumer.

Cardiac Arrest: It is important to judge the quality of beer by alcohol percentage rather than price. Consumption of the highest alcohol content beer can lead to cardiac arrest.

Alcoholic cardiomyopathy is a known term in the medical world. It includes the heart problems that consumption of alcohol compliments.

Alcohol may have caused you to trouble with confusing thoughts. According to people around you, alcohol can be both a medicinal liquid and venom that works slowly. However, as per our research, both statements can be true. It truly depends on the “alcohol content of beer.”