Dinner and drinks could mean many things when a bottle of Grand Marnier liqueur is involved. A drink with a thoroughly entertaining, roller-coaster ride of a story, the Grand Marnier is extremely versatile – whether in a glass or after the meal in your dessert! This delicious French liqueur is sweet and citrusy, which makes it popular across bar and food menus.

Steeped in tradition, the process of making the liqueur is 140 years old and passed through posterity, with the reins now in the hands of the founder’s sixth-generation descendant. The liqueur is made in a Chateau not very far away from the French capital of Paris using grapes produced by local wine producers, and oranges from as far away as Seville.

Without further ado, let’s jump into the many faces of Grand Marnier.

How the brand started with a liquor novice and a marriage

This may come as a myth-buster but, the French do like to drink harder liquor than just wine. And Grand Marnier is proof of this. A man called Louis-Alexandre Marnier, who came from a family of winemakers started assisting at a rather “modest distillery” owned by a man called Jean-Baptiste Lapostolle outside of Paris in 1827.

He soon married the old man’s daughter and started the company that makes the famous French triple sec (which means triple-dry) in 1880. But what gave him an edge was a then- exotic ingredient — orange. Ever since, the business has remains in the family and is today run by Marnier’s sixth generation, Alexandra Marnier Lapostolle.

Long before being served in restaurants and at hotels, the Grand Marnier cognac established links with the hospitality industry. Cesar Ritz, the hospitality giant who founded the luxury Ritz-Carlton hotel chain, and Louis-Alexandre were thick as thieves. The hotelier helped Marnier come up with the liqueur’s name and also designed its decanter, and finally started serving it at the Savoy Hotel in London when he was its manager.

As recently as 2016, the Campari Group, which controls over 50 brands of liquor worldwide gained a significant stake in Grand Marnier, with a family member still serving as its vice-chairperson. Fun fact: the popularity of the cognac is such that the company sells one bottle of liquor every two seconds worldwide!

A distilled medley of fruits makes the Grand Marnier 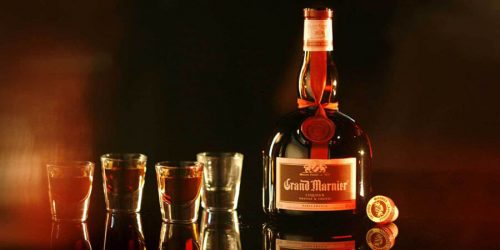 The liqueur is a blend of brandy made from Ugni Blanc or Trebbiano grapes (an Italian variety used in wine which has high acidity, making it an imperative in cognac production). The grapes come from five cognac crus (regions where the fruit is grown). The cherry on the top, which is perhaps the most iconic ingredient of the liqueur, is the Citrus Bigaradia, or the famous bitter orange grown in Spain’s Caribbean Seville region.

Now a look at the oranges used in Grand Marnier.

The liqueur is poured in its iconic bottle with a red ribbon on the top and a wax seal symbol of authenticity and quality.

Distilled also using large quantities of sugar, the Grand Marnier is an exceptionally strong drink. The ABV, or the alcohol content is 40 percent, which makes the alcohol proof (another form of measuring the alcohol in a particular drink) of the liqueur 80.

Donning several hats: the final product is used in food as well as drinks

The Grand Marnier can be consumed on the rocks or neat as an after-dinner drink, as well as in cocktails. Because of its high sugar content, the Grand Marnier liqueur can be used everybody’s favorite course of the meal — dessert! Now, its introduction to the world of sweets itself a happy accident. King Edward VII of England was being served a French delicacy called Crepes Suzette, a crepe with a boozy sauce on top (read: pancake with alcohol). A waiter in Monaco accidentally lit the dessert which had a liqueur sauce on, flambéing it!

Ever since Grand Marnier has been adapted into several dessert recipes. Here are a few:

Grand Marnier soufflé: Melt three tablespoons of butter in a saucepan on medium heat and stir flour until golden brown for two minutes. Add milk and stir regularly until it is smooth. Remove from heat and stir orange zest and one tablespoon of Grand Marnier. Then add egg yolks, vanilla and mix until smooth. In another bowl, add egg whites and whisk till frothy, then add sugar and keep whisking. Combine the two mixtures and bake in the preheated oven until it rises and turns brown.

Chocolate mousse: The fluffy whipped texture of the chocolate mousse is extremely delightful. Add your favorite chocolate to the velvety orange flavor of Grand Marnier, and you will be hooked!

Orange trifle: Pound cake, marmalade, mascarpone cream, and the smooth orange flavor of Grand Marnier along with slices of orange: a rich, decadent dessert which is a natural people-pleaser.

Cosmopolitan: Pour Grand Marnier, triple sec, vodka, and cranberry juice into a cocktail shaker with ice. Cover, and shake until it is frosted. Strain into a chilled martini glass, and garnish with a lime twist to serve.

Sidecar: It is said that the Sidecar is essentially a Grand Marnier cocktail. It was made in the Ritz hotel (remember Louis-Alexandre’s best friend?) in 1992. Combine brandy, lemon, and Grand Marnier in shaker tin and add ice to small shaker tin. Shake until tin is frosted over. Strain into a chilled cocktail glass, rimmed with sugar. Garnish with lemon twist.

The Grand Marnier is often compared to the madly famous Cointreau, and rightly so! For those looking for replacements, or simply to understand how the Grand Marnier tastes, here are some things the two have in common:

Cointreau and Grand Marnier are both orange-flavored liqueurs, with 40 percent alcohol content. The two brands are made in France, both not very far away from the capital city Paris. Both the brands originated in the 1800s, with the first bottle of Cointreau having been sold only five years before the Grand Marnier in 1875!

Not identical twins, the two liqueurs also differ on several scales. The Cointreau is made more in the triple-sec style, while the Grand Marnier in the style of curacao. Cointreau uses both sweet and sour oranges while Marnier only sour and bitter ones.

Grand Marnier price: Marketed by Moet and Hennessy in India, the 700 ml bottle of Grand Marnier is priced at Rs 3,945. This mid-range price is rather suited for a drink that does not age too well. If stored in a cool and dry place, a bottle of Grand Marnier can last two to three years without any serious alterations in its taste and aroma. It then starts losing some of its bouquet and aroma but will be drinkable for about eight years.

So even if you’re a teetotaler with a sweet tooth, this particular cognac is very likely to turn you into a cocktail enthusiast! So go ahead, ask that special someone out and treat them to a Grand Marnier-themed night of drinks and sweets, straight from the land of love – Paris!

Harvey Wallbanger, Last Word, Sazerac: How These Three Drinks Got Their Name!!!

What Is Vermouth the Right Choice To Make Cocktail?