Drinking spirits can lift your spirit; bring you in a good mood. We can get them in many colors and what best if it is a bright green. Absinthe is a spirit that comes with numerous delicate ways of making the drink. It would taste best in a fancy environment as the drink-making process makes you feel like royalty.

Wondering what does absinthe taste like? This is an anise-flavored spirit. The preparation needs botanicals such as green anise, sweet fennel, flowers, leaves, and a few more herbs. It is a beverage with high levels of alcohol. The alcohol level is as high as 45-47%. It is usually green naturally but many brands choose to make it colorless too. It is at times wrongly referred to as liqueur; means bottled with added sugar, but this is not true. Hence; it is a spirit by classification. 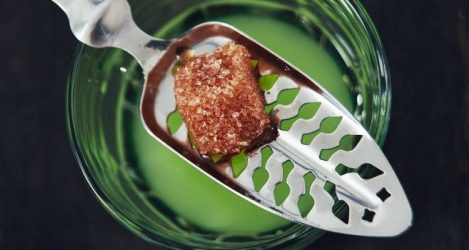 Fame And Defame of Absinthe Alcohol

According to believers; Absinthe was originally made in canton of Neuchatel situated in Switzerland during the 18th century. It was quite famous among the artists and writers of France in the 19th and 20th centuries. Though; its consumption was regularly opposed by being related to Bohemian culture. It has been a favorite of celebrities like Ernest Hemingway, Arthur Rimbaud, Paul Verlaine, Oscar Wilde, Alfred Jarry and many more.

Consumption and production of Absinthe liquor had been banned until the recent past. The reason given was its highly dangerous addictive psychoactive and hallucinating properties affecting the drinker. The harmful effects are a contribution of the compound thujone found in traces. In the year 1915 countries like France, Netherlands, Switzerland, Belgium, Austria-Hungar, and the whole United States and Europe banned it.

The fact is that to date no special effects have been noticed by anyone other than those of any other spirit. The theory of the psychoactive nature of Absinthe was just exaggeration. As a result, the ban was lifted in most of the countries in the 1990s. This was possible due to the introduction of the modern European Union Food and Beverages law. By the 21st century, 200 new brands were launched for Absinthe in countries like France, Austria, Switzerland, Germany, Spain, Netherlands, and the Czech Republic.

If you are still wondering; is Absinthe legal in the US? Then we would like to inform you that yes it is very much legal. On March 5, 1995, the ban was done away with, it is also marked as “National Absinthe Day” fondly by the drinkers. Now many new Absinthe cocktails have also been developed to enhance its flavor to the most.

How To Make Absinthe?

Now as we know the method of many spirits has been pre-decided and described in the definition, but there is no such specific definition for Absinthe anywhere in the world. So there are no designated standards for the production of Absinthe. The producers have free will here. The most commonly used two methods are:

Interestingly Switzerland is the only country to have defined Absinthe, so they have legalized the process of distillation. The process is quite similar to that of the production of high quality of gin. All the ingredients are macerated in distilled base alcohol then; redistilled to get the bitter parts and reach the complexity and texture so desired.

The traditional color is due to chlorophyll which imparts green color; this comes in the fluid due to the secondary maceration. Since chlorophyll remains active later also so it helps in the aging process of Absinthe. The final product is diluted to the set percentage fit for sale. The taste is said to improve with age in the case of Absinthe.

This is a lesser costing process not involving distillation. The produce is compared to cheaper gin and regarded lower in quality to distilled gin. But in this case, the produced is also sold at a high content of 90% ABV. While a few other brands sell simple suspension of powdered herbs in the alcohol.

Expensive Absinthe was prepared from distillation of grape spirit while lesser quality is produced through alcohols derived from grain, beets or potatoes.

How to drink Absinthe?

It is very interesting to know how to make this drink. There are many fancy ways to make the perfect blend. It is not just mixed with water or soda and consumed like any other spirit. There are sophisticated traditions followed religiously to create a glass for you. Since it is very harsh generally sugar and ice-chilled water are mixed. Here are a few ways to do the same:

Once the glass is ready you can see that a few insoluble components coming from fennel, anise and star anise rise. The whole solution gets a cloud formation on the top. The final preparation is milky in appearance. The solution is called a louche. The aroma produced coincides with herbal aromas it has been derived from. These fragrances are looked in the neat spirit and get enhanced when mixed with water and sugar.

It is a rather newer version of the drink. In this process, fire is used. Just like the French method a sugar cube is placed on the spoon on the glass brim. But the difference here is that the sugar cube has been dipped in alcohol and then it is set ablaze. This burning sugar is dropped into the glass and further ignites the Absinthe. A shot of water is added to turn out the flame and finally make the drink ready to drink.

This method is known to have a stronger result as compared to the French method.  Though; many people think that this method ruins the taste and quality of the drink. Also, one more fact is that fire hazards are coming your way since the alcohol content is too high in Absinthe.

When the popularity of the drink increased a new way of serving this drink was invented so that many people could enjoy it together. A large jar was filled with iced water and given to the person. It had the benefit of making more drinks without being messy and enjoying a drink with your friends at your speed. The water would slowly drip while you merely chat away.

In the 19th century in many Parisian cafes, it was left solely on the will of the drinker to prepare the drink for himself however they wanted. As it was completely the choice of that person to add sugar or not.

There is a special set of spoons designed for Absinthe. They have holes in the base and a small ring on the neck to allow the spoon to rest on top of your glass.

The glass used for Absinthe is not usually the common glass. It has a small bulb-like a reservoir at the base generally about 60 ml so that you can have the same amount of Absinthe and not overdo it.

Since there is no specification or defined a process to make the absinthe there are various versions of this spirit available in the market. It was later categorized vaguely based on strength and quality. Though distilled is preferred over mixed version but here also there is no certainty of uniformity. The quality varies from brand to brand based on how skilled the maker is or not.

How To Store Absinthe?

The clear or artificially colored absinthe is very stable; so it can be easily stored in clear glass bottles. But the same cannot be done for the natural color. The chlorophyll is active and in contact with sunlight, it will further oxidize. This will change the color further to yellow and later to brown.

Though you cannot really something made out of the process of spoiling really. So when this whole color change period is over it is called Feuille Morte. Before the ban, it was a favored version among the frequent drinkers. This also assured one fact the Absinthe was natural and no harmful chemicals were used to produce the color.

This change in color does not have any adverse effects on the taste; it remains more or less the same. But still, many people prefer the natural green color so, for that, it has to be stored in dark, light-resistant bottles. Those who want to store for decades must put it away in a cool, dry place where possibly no light or heat can get to it.

This does not mean you put it in the freezer; as this will cause the anethole to polymerize and form irreversible precipitates. The original flavor will be gone and it will never again mix upon all efforts.

So go on and have a taste Absinthe Las Vegas or anywhere you wish. Just be aware of the product you use. Please ask for details about its manufacture process, as that is the only way to differentiate the different versions. Fountain Absinthe is best to be enjoyed with friends and get a little creativity out of yourself. It is a preferred drink of many writers and artists to date.

Mulled Cider: The Tastiest Way To Have Your Apples