What could be more tempting than a refreshing cocktail in a copper vessel? Imagine a chilled spicy alcohol mule served in a shiny mug with drops of condensation dripping down the surface; well that is the sensational ‘Moscow Mule’. Born out of a need to clear some overstocked alcoholic beverages; this cocktail gained a lot of popularity over the century.

A drink that’s served throughout the year, be it on any occasion, Moscow mule is a unique refreshing cocktail that is utterly simple to make too. Moreover, this mule drink has a bit of an interesting story of its origin and uprising. Quite disputed though, there are various narratives about its invention and how it became one of the all-time favorite cocktails for Americans.

This blog is all about the stories of its discovery and its journey from a bar in New York to every bar in the world. First, let’s dig into the mule’s history.

What Is A Moscow Mule Drink?

A cocktail made up of boozy ginger beer, vodka and lime juice garnished with a slice of lime is utterly invigorating, and balances perfectly between a spicy, sweet and strong taste. Moscow mule drink is the best refreshing cocktail for hot summer days and is evergreen throughout the year.

The recipe of Moscow mule came into being in Manhattan in 1941 and has nothing to do with Russia. Further, the drink’s name consists of the word ‘Moscow’ because of people’s belief of associating vodka with Russia; however, the drink got its name through a random pick.

The discovery of the Mule –

There are many disputing stories about the cocktail’s origin. For instance, one of them involved three friends. John A. Morgan, president of Cock N Bull products ( manufacturer of ginger beer), Rudolph Kunett – president of the Pierre Smirnoff, and John G. Martin – president G.F. Heublein Brothers Inc.

So, these three friends were sitting in New York’s Chatham Hotel’s bar, discussing the problem of oversupply while having drinks. Kunett and martin had an idea. They thought of mixing some vodka and lime juice with Morgan’s ginger beer. Morgan arranged for lime and ice and made the cocktail by pouring each drink one by one in three mugs filled with ice. Counting down to five they drank the new concoction excitedly and a new taste originated! It was refreshing with a strong flavor and a spicy kick.

Another story dates back in 2007 with a new version of the discovery of Moscow mule wherein the cocktail’s inventor was Morgan’s head Bartender Wes Price. As published in The Wall Street Journal by Eric Felten, price said that he just tried to clear out the dead stock lying in the basement and make some money from it, during this, he discovered Moscow Mule.

Besides that, ginger beer is mixed with rum and whiskey from a long time but what made Moscow mule unique was the copper mug. Martin who wanted to sell his Smirnoff vodka did heavy marketing for this cocktail all over the United States.

He took two Polaroid pictures of bartenders posing with a copper mug and a bottle of Smirnoff vodka. He gave one picture to the bartender for display at the bar, He put the second one into his collection which he used to show at the next bar he visited. This made the word spread like wildfire and everyone got tempted to taste this unique new cocktail served in a copper mug.

Why Is The Moscow Mule Drink Served In A Copper Mug?

Apart from it being a tradition, there is a scientific reason behind housing the cocktail in a copper mug. The metal insulates the temperature of the ginger beer and helps it to stay chilled. At first, the mule drink was served in pure copper mugs. But because of certain risks involving copper toxicity the use of these mugs stopped. The mule had an acidic nature that could dissolve the copper in the vessel if it stays too long in it, and copper is harmful if consumed.

Due to this, pure copper mugs are banned from being used to serve any acidic drink, instead, copper mugs coated with another metal like stainless steel on its interior are to be used which are widely available. Till today. Moscow mule is served in these copper mugs as a tradition.

How to make a classical Moscow Mule?

The best Moscow mule recipe is the simplest one; the classical procedure to make this cocktail involves very few steps and ingredients in just 2-3 minutes. 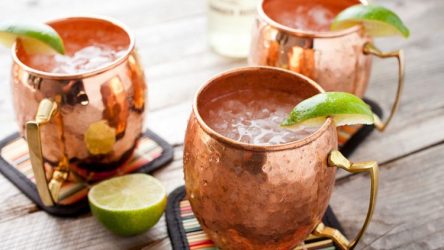 With just three ingredients in the list, this drink depends merely on their quality. Avoid using cheap beverages and go for some good quality alcohol. Here are the three important ingredients required to make 1 Moscow Mule drink –

2. Vodka (2 oz)– Again quality is of much importance so don’t opt for a cheap bottle instead consider some good brands like Crystal Head vodka aurora, Prairie organic vodka, and Smirnoff.

3.  Lime juice (1/2 oz) – Use freshly squeezed lime juice and not the bottled one. Also, we’ll need a wedge of lemon to garnish the mule.

Short and simple as the ingredient list was, here is a three-step recipe to make Moscow Mule –

As the years passed, the drink became famous rapidly and took various forms. A different liquor or a new flavor is added with each variation and its taste enhances more and more. Here are some of the Moscow Mule variations that you can try at your home –

1. Bourbon mule – A good bourbon will complement with ginger beer and will enhance the kick.

2. Pomegranate mule – The tartness of pomegranate will add flavor to the classic drink.

4.  Jalapeno Moscow mule – Amplifying the refreshing qualities of the original, this variation is a perfect hot-cool combination of jalapeno and mint.

5.  Skinny mule – This is a low-sugar, low-calorie classic mule and is perfect for people on a diet.

6.  Moscow blue – The tangy taste of blueberry lifts the original taste of Moscow mule and the blue color gives it a perfect bright texture.

8.  Garden mule – This can be called a jazzed-up version of the classic mule, some extra flavors are added to the original.

Apart from these, there are various other variations available, you can even make a new one through some experimentation. Moreover, ready-to-drink Moscow mule cans are also available in the market. Some of them are – Moscow Mule 2.0, Smirnoff Moscow mule vodka, salt point Moscow mule, punching mule Moscow mule and many more…

Generally, the alcohol content in a Moscow Mule varies with the volume of ginger beer and vodka in it. The mentioned recipe in this blog will make one serving which will have an alcohol content of 11 percent ABV which is quite mild as that in a glass of wine!

Some interesting facts about Moscow Mule-

Moscow mule has gained a lot of popularity in countries other than the United States. Also, it has gone through several modifications too. This iconic cocktail is amazing to taste as well as easy to make. There are many variations available discovered by people around the globe. If one doesn’t want to put any effort into making the drink he can grab a Moscow mule can which is readily available in the market. To enjoy a cocktail traditional, you’ll just need a Moscow Mule Mug.

Sit back, relax and enjoy a rejuvenating cocktail in that shiny mule mug!

Frangelico: A Sweet Liqueur For A Change