White Rhino brewing company is India’s first craft beer brewery which was founded in the year 2016. This brewery aims to enhance the beer market of India by introducing both variety and quality.

The research for developing this brewery was quite extensive and required a lot of assistance from young enthusiastic experts. The White Rhino Brewing Company is situated in Malanpur right in the heart of India, close to New Delhi.

This area has an unusual topography as it falls under the Chambal region. The climate here is perfectly suited for brewing quality craft beer. The White Rhino Beer is practically an addition of innovation in the beer industry, there isn’t any competition with other brands as this is a unique kind of beer.

The White Rhino Beer brewery is well equipped with the standards of American or European brewing. The machinery utilized in White Rhino Brewery is manufactured in the Czech republic. The breathing process off White Rhino is unique and they thrive to make the experience as unique as possible.

White Rhino is a unique kind of bravery as it is still taking the opinions of consumers and improving themselves. The beers brewed within the brewery is constantly tasted and innovated to enhance the flavor.

White Rhino Brewery thrives for perfection that is why all the components of their beer are properly tested and scored from all across the globe.

The manufacturers and inventors in White Rhino Brewery are taking the traditional methods of beer brewing and twisting it to their satisfaction to help bring out the perfect innovative craft beer that will suit the requirements of India today.

This beer is one of the true products introduced by White Rhino Brewery, and there are Indian twists infused with foreign recipes. The Belgian beer Brewers generally utilize raw wheat to produce this kind of bear. 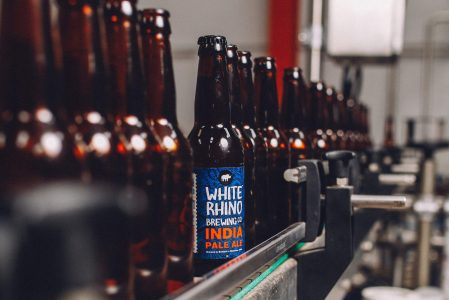 But the White Rhino Brewery tweaked the previous traditional recipe, and instead of using raw wheat, they utilized rolled wheat along with that fresh organic coriander seed which was scored from the Himalayas. This complicated method induced a sophisticated touch to the special craft bear and produced a refreshing aromatic concoction.

The alcohol percentage in this beer is 4.9 %, and the grains utilized in this beer are pilsner melt, rolled wheat, and wheat. There is Magnum hops in this beer to bring out the bitterness,  along with orange peel and coriander for flavor.

India has quite a few brands of beer that mass produces lagers, which is why white rhino brewing company developed there own recipe of true Lager craft beer. This beer is brewed perfectly with 100% 2-row pilsner malt and hopped with only the prime varieties.

This brewery thrives to produce a beer that will introduce the beer perfectionists to elegant and simplified lager which has been brewed carefully with the infusion of authentic ingredients and matured for a longer period of time.

The yeast was left to ferment for a month before the filtration process. The hops used in this beer are Tettnanger, Mittelfruh, and Magnum. And the lager beer has an alcohol concentration of 4.8 %.

India has always been popular for its Pale Ale, that is why we took the legacy and tweet it according to our preference. In the modern redemption of The Pale Ale beer, we created a well-balanced, contemporary and tasteful beer that can represent the history of pale ale in India.

This white rhino Indian pale ale contains 6.3 % alcohol and is made of pale melt. The hops that are utilized to bring out the traditional bitterness of beer are Styrian Goldings, Cascade, Mosaic, and Ahtahnum.

With significant local success white, rhino brewing company became ready to share their experiences and magnificent results with the world.

They wanted to share the Indian way of beer making and make the world recognize the elements of unique Indian twists. The white rhino brewing company developed a small batch of beer that will attract the interest of foreign consumers, these beers were influenced by local characteristics so that it reflects the style and culture of India.

The pale ale used to be a drink of choice for the wealthy Britishers in India. The drink used to be shipped from London. Now it is one of the prime drinks in India and The White rhino enhanced and tweaked the recipe to suit the taste of both local and foreign customers.

To get it ready for the world White Rhino increased the utilization of hops ( Styrian Goldings, Mosaic, Willamette, and Cascade) to enhance the aroma and create a bold beer to showcase the taste of India. This beer has a 6.3 % alcohol concentration and uses pale melt for production.

The white rhino tweaked their local lager beer recipe to prepare it for overseas traveling. This bear is enriched with characteristics that represent India.

The lager beer can be perfectly paired with Indian cuisines. This white rhino lager beer has 4.8% alcohol concentration, and grains like the Vienna malt and pilsners malt is used for production. Also to bring out the traditional bitterness hops like Tettnanger, Magnum and  Mittelfruh are used while brewing.

The general White Rhino Beer alcohol content is 4.8% except for the international India pale ale which is 6.3%. The white rhino beer calories are quite low compared to the other brands it is about 120 to 137 calories per bottle whereas the calorie content in other brands exceeds 200.

White Rhino Beer focuses majorly on quality rather than competitiveness, though there are other brands dominating the Indian beer market still, White Rhino is focused on producing quality craft beer and giving their consumers the taste of elegance rather than rushing into the competition.

The White Rhino Brewing Company is still at its prime stage where they are experimenting and enhancing their products to satisfy their customers.