Tito’s Vodka is the Fifth generation inc. vodka brand, founded by the man with the interesting name Tito Beveridge, in 1997 in Austin, Texas. The birthplace of the drink has made the drink famous among Americans. Like fine single malts, and high-end French Cognacs this savored spirit is prepared with it in an old-fashioned pot still. This popular vodka is introduced in the market with the name Tito’s Handmade Vodka.

Starting with a little production the company was no more restricted to micro-distillery, and has surpassed the 40,000 cases by 2001. Currently, the industry producing the drink is filling 500 cases in an hour and the rich taste of corn in the drink is under great demand.

According to 2017 report, the drink had a market share of 7.1% of the US Vodka market. From this, it can be assumed that how much hearts the drink has won in a small time.

Here we have enlisted some of the interesting facts of the drink. Read the complete information below to know more about the Tito’s Vodka ingredients, taste, nutrition and lot more. 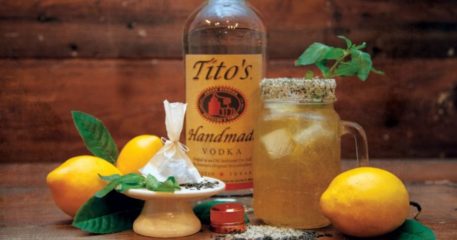 Tito had the hobby of making infused drinks, the result of which is the popular drink, Tito’s Handmade Vodka. The drink was made by infusing inexpensive vodka and using a pot still. Later on, the commercial production was started in the year 1997 after establishment Mockingbird Distillery and formation of Fifth Generation, Inc. In the beginning, he produced 1,000 cases and by the year 2007, 160,000 cases were sold.

With gaining name and fame after winning a double gold medal in the year 2001 and four-stars ranking from the Spirit Journal the demand for the drink increases at the accelerated rate.

At present, the drink is served in the entire United States and Canada.

The name behind the drink: The man behind this famous and savor vodka has a funny name, Tito Beveridge. Of course, he named the drink by his name, but his last surname is what makes everyone else confused. Many think that it is his last name that drew him towards drinks business, but that was not true. Although the name, Beveridge means a man who practices of preparing free drinks by asking for bargains which were never made, the production of drink was all about the hobby and does not have any connection with the name.

Tito made the label: The label for the drink was made by him in the year 1994. He kept it simple yet authentic that draws many people attention towards its bottle.

Americans love the drink: This vodka drink is born and raised in Texas that makes it the Americans fall for it more. The first distiller of the drink was spread across 12 acres of land in Southeast Austin and is growing in both size and popularity since its establishment.

Harder but worthy Vodka: Unlike other vodka production done in column stills, the production of the Tito’s Vodka Proof uses the old-traditional pot stills. The process is more labor-intensive but gives the drink the best taste among all other vodka.

The best distilleries do check its taste every batch to avoid any compromise with its quality and taste. Although the drink is using the same preparation method as fine single malt scotches and high-end French cognacs, many efforts were put to improve its taste and make the drink worthy when many drink lovers like and appreciates its taste.

Turning Vodka into Love and Goodness: The drink made and served with the major objective of spreading love. Tito, the man behind the vodka started the process with the single objective, to spread love across the world. For this he empowered every member involved in the process to focus on the things that can make can make more people fall for it.

Tito Builds-up the Partnership with the Dog Charities: Tito partners its brand with many of the dog charities like Emancipet. It is a non-profit spays organization that sells merchandise for charity and pledges itself to be the vodka for dog people.

Tito’s Handmade Vodka won two gold medals: In 2001, the famous brand of vodka, Tito’s Handmade Vodka become more popular after winning the double gold medal for the best vodka drink in San Franciso World Spirits Competition. The judges make their judgment after having a taste of every drink nominated for this prestigious recognition.

Tito’s Vodka Nutrition Facts: Since the drink is famous among many and so many are concerned towards gaining knowledge of tito’s vodka calories. In general, 1 shot of drink serving of Tito’s Handmade vodka has 70 calories. Further breaking down the calorie, the Tito’s Vodka carbs constitute 0%, 0% fats, and 0% proteins.

Check the list of ingredients of the famous drink prepared using Tito’s Vodka.

The Way to Prepare

No wonder the taste of the drink allures everyone. But what if, I tell you that you can enjoy its aroma in the eatables as well. Yeah, that’s true. This famous drink is the major ingredient of the delicious cake. Here know its recipe and try it this weekend.

Follow the Instructions to Get the Best Taste Cake

So next time you get the bottle of Tito’s Vodka do not forget to try this tasty recipe.

This blog has helped you know about what is Tito’s Vodka made from and lot more important information about the drink. So this time when planning to drink, stimulate your taste buds with something different!!!

What is Vodka Made From?