Sugar alcohols are a group of carbohydrates called polyols with the least calorie count of 2 kcal/g. Many people considered sugar alcohol like the alcohol drink but that is not true. Considering its chemical nature sugar alcohol are sugar molecules having an alcohol group attached to it.

It occurs naturally in fruits and vegetables and are the reduced-calorie substitutes to sugar. Since it contains fewer calories and thus does not spike up the blood sugar level sugar alcohol and keto diet can go along together.

Some of the sugar alcohols in food ingredients are Malitol, Xylitol, Erythritol, Sorbitol, etc. Consuming these sugars does not affect the total carb count and thus is a suitable option for those who are on their keto diets.

One of the problems associated with the intake of sugar alcohol is that they are different and so its effect varies. Some of the available food rich in sugar alcohol causes digestive issues and a few even kick out of ketosis.

In other words, not all polyols are carb-free, so it’s important to check the label.

Most of the sugar alcohol consumed is absorbed incompletely in the small intestine. Thus, it does not raise the blood sugar level as other sugar-rich diets. Since it is absorbed to a little extent, it does not spike the glucose level to a high degree. Keto and sugar alcohol are thus the best combination for those who are trying to lose their weight without compromising the taste. 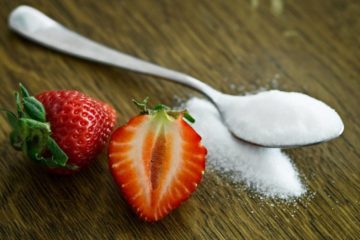 Sorbitol that is absorbed to the largest extent, one of the sugar alcohols called Erythritol undergoes a somewhat different metabolism. It gets fully absorbed and excreted completely in the urine. So, it does not affect the blood glucose level and is the best option who want to reduce their weight or are suffering from diabetes.

How to Calculate Net Carbs in Keto Sugar Alcohol

When you purchased an item containing sugar alcohol then you might come across the percentage of sugar alcohol listed in the listed. Since it is not completely metabolized what strategy you use to calculate the sugar alcohol net carbs keto in it? Do you subtract sugar alcohol from carbs on keto?

To calculate the net carbohydrate in the food item subtract half the amount of sugar alcohol from the total carbohydrate count.

There are different types of sugar alcohol that differ from each other in terms of calories per gram. Get to know more about each type in the explanation below.

With 2.6 calories per gram and 50-70% sweetness of sugar. It offers a smooth and cooling effect and is therefore found in chewing gums, candies, and frozen desserts.

It does not affect the blood sugar level but might cause little digestive distress.

It has 2.1 calories per gram and 75% sweetness of sucrose. This sugar alcohol is commonly used in the preparation of hard candies and is also found in chewing gums, ice cream, baked goods, chocolate, etc.

It is the best and recommended sugar for diabetic patients, but it is advised to monitor the sugar level regularly.

Well-Researched sugar alcohol having 2.4 calories per gram and 100% sweetness of sucrose, Xylitol is found to offer the best benefits to oral health.

It is commonly found in toothpaste, mouthwash, hard candy, and gumdrops.

It is associated with digestive symptoms if consumed in a large amount.

The sugar alcohol with great taste is produced with the fermentation of glucose in cornstarch. It has a calorie count of 0.2 cal/g and has 70% of the sweetness of sugar.

It offers great benefits to digestive health and is commonly found in one of the famous sweetener blends known as Truvia.

It is the only sugar alcohol that is not absorbed in the blood and is excreted unchanged in your urine.

Commonly used as an ingredient in chocolate-flavored coating used in ice-creams Mannitol contains 1.6 cal/g and has 50-70% sweetness of sucrose. It shows the poor reabsorption by the kidney and might display a diuretic effect.

Having 2 calories per gram and 45-65% sweetness of sucrose Isomalt is commonly found in toffees, lollipops, wafers, and cough drops.

Sugar alcohol contains fewer calories and hence is associated with many health benefits. Some of the major benefits that give you the reason to include sugar alcohol as your daily food ingredients are:

The heavy sugar consumption increases the bacterial count in the mouth that erodes the enamel and causes tooth decay. The process took place because of the loss of mineralization and enamel that often occur due to the consumption of sucrose.

The major sugar alcohol like xylitol, erythritol, and sorbitol can prevent cavities by remineralization of both enamel and cavities.

Xylitol has the proven effects of maintaining oral health. This is because bad bacteria in the mouth are unable to metabolize it thus inhibiting their growth machinery.

Erythritol, on the other hand, offers the balancing effect on bacteria present in the mouth thus inhibits the formation of cavities.

Sugar alcohols are least absorbed in the blood and thus work as the prebiotic thus offer feed to the bacteria present in the gut.

According to the studies in rats, Xylitol offers protection to the bone and prevent it from loss. Rats, when fed with a moderate amount of Xylitol, were found to have increased mineral density and bone mineral content.

Although there are plenty of benefits of consuming sugar alcohols, it is associated with some side-effects as well.

Since sugar alcohols are absorbed partially in the body the unabsorbed part enters the large intestine where it is fermented by bacteria.

Consuming a large amount of sugar alcohol might end up causing gas, digestive discomfort, or other laxative effects. Although the effect of sugar alcohol keto differs from person to person mannitol, isomalt, and sorbitol are found to cause diarrhoea and gas.

If you are following a keto diet, then it is good to avoid some sugar alcohol like the one mannitol. Mannitol is made up of two carbohydrates, one of which is glucose. When someone consumed food containing mannitol, it gets a breakdown by the digestive juices thus releasing glucose in the blood. This increases the blood glucose level.

Does sugar alcohol count as carbs keto? Since sugar alcohol does contain carbs and is absorbed in blood a bit consuming it more quantity equalizes its carbs to standard table sugar, thus increasing the overall weight.

When on a keto diet and using sugar alcohol to prepare a dish sugar alcohol on keto? Sometimes adding sugar alcohol might change the texture or consistency of your food. Find the best way and keep on experimenting with its quantity to know the way that works best for you.

How Many Ounces In A Gallon? How can I calculate alcohol consumption?

Understand What Wernicke-Korsakoff Syndrome Is?