When Olivia O’Brien sang “I’ve been thinking, thinking it over/ I’ve been wishing, that I was sober/ Maybe later, you can come over/ And we can make a root beer float”, memories of refreshing summer drinks, churned with a nostalgia for irredeemable simple childhood days came back speeding!

But for adults now, a simple non-alcoholic beverage would do very little. So worry not! For we have found a recipe just as refreshing, which packs that much-needed punch of adult juice to drive worries away post-work hours! If you’re lazing at home watching a little TV on a hot summer afternoon, or hosting a lunch for your friends, add some root beer to glass and your favorite vanilla ice cream to top it off, with a bit of your favorite alcoholic spirit.

What Is Root Beer?

Time for a history lesson. Much like the most amazing culinary inventions, root beer was first made as to the result of an accident. Root beer was initially called “small beer,” brewed using herbs, tree bark, and berries. 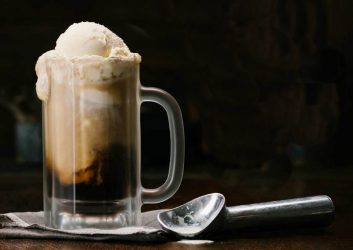 In medieval Europe, with the Black Death or the plague was rampant, water contamination was already making large swathes of the population sick. People began brewing drinks like tea and beer to kill the pollution, making beverages healthier.

This was true also of colonial-era America. This “small beer” contained a little alcohol, somewhere between 2 and 12 percent, a drink so widely consumed that it found mention in William Shakespeare’s plays!

A couple of centuries later, pharmacists created a miracle drug or “cure-all” for diseases in the late 19th century. Root beer was originally sold as a remedial syrup (much like cough syrups today). It tasted bitter-sweet and was bought only to cure sickness.

A man called Charles Hires is widely traced back as the inventor of this now-delicious beverage.

He was made the recipe marketable and as per his biography, he discovered a delicious tea recipe on his honeymoon, which he copied and sold as a cure-all. The concoction was called “Hires Root Tea” and was packaged as a dry mixture of tea.

The “root” was the sassafras tree root (infamous now, because the US Food and Drugs Administration termed it as a cancer-inducing ingredient).

To appeal to the working classes, Hires started to sell the cure-all as a beer instead of a tea, or as a “temperance drink,” saying it has no alcohol content and was thus a great alternative to alcohol.

The change of name proved to be successful as he was soon selling the syrups to soda fountains.

It was marketed as a “health beverage” with the slogan, “Join Health and Cheer, Drink Hires Root Beer!” Today this is ironical because it has been proved to contain some serious health hazards.

How To Root Beer Is Had Today

Root beer is a popular soft beverage, much like a soda, in North America. It is made using the bark of the sassafras tree. It is non-alcoholic, and lacks caffeine, making it ideal for children. Much like regular beer, root beer has a foamy head (the bubbly top layer commonplace in most beer).

Commercially produced root beer is sweet, carbonated and flavored using artificial sassafras because the ingredient was banned by the US FDA as it is said to contain carcinogens (oops!).

Wildly popular when paired with ice cream, root beer float soon became a children’s favorite in North America, and was as easily found at birthday parties and grandparents’ houses lemonade or cookies.

Unlike most sodas, root beer is not generally very carbonated, making it better for your teeth than most soft fizzy drinks. However, it does contain plenty of sweeteners and artificial flavors, and therefore not exactly healthy for you. Although, one little treat once in a blue moon never hurt anyone!

In a tall glass, add Root Beer schnapps and vanilla ice cream. Top with Root Beer of your choice and garnish with whipped cream and a cocktail cherry.

Here’s another recipe using whiskey for you heavyweights

Pour Whisky into a glass, add vanilla ice cream and top with Root Beer. Top with whipped cream and fudge sauce for that sweet goodness.

In a tall glass, add Kahlúa and ice cream, then top with Root Beer. Enjoy!

Now, this may be an unpopular opinion, but root beer tastes heavenly in dessert! Here’s a recipe for root beer pie:

A dessert to die for – root beer pie

Set aside and refrigerate 1/2 cup whipped topping for garnish. In a large bowl, whisk the root beer, milk and pudding mix for 2 minutes. Fold in half the remaining whipped topping.

A celebration for a deserving classic on August 6

Can you imagine a recipe so popular that it is honored on the calendar with its own day? On August 6 every year, the Americans celebrate National Root Beer Float Day.

With discounts, contests, and whatnot, people come together to celebrate this great drink/dessert. In the stifling heat, this August make plans to spend your day doing just that – round up a bunch of homies at work or at home, and enjoy clean, innocent ice cream-topped root beer floats, or dabble in the dirty ones!

Most root beer recipes don’t go well with Indian food, which is why it can be a challenge to locate restaurants serving them. Root beer itself has spicy notes, reminiscent of cardamom, star anise, and cinnamon, which is why pairing it with food that already has those spices is a recipe for disaster.

You’ll be lucky to find root beer or its many kinds of concoctions being served at restaurants or bars near you, however, only very niche places may offer them. The best way to have root beer is to include it in your recipe, and make it in the comfort of your home!

Root beer has a cousin which is perhaps more popular in India – fruit beer! Fruits have traditionally been used to make this beer, but today, breweries add extract, syrup or processed flavors instead of undertaking the process of fermentation, which is why it shares a similar taste to root beer.

It is also very easily available for those who crave for a taste of their childhood. Barbican, that sells a pack of 6 Mix Flavours including pomegranate, raspberry, peach, apple and watermelon for $9, is available both online and offline in India. Another product, especially reminiscent of childhood is by Chinar Agro, which makes the fruit beer in lychee, apple, grape and pine flavors.

Stock up on some root beer, along with some vanilla ice-cream (try other flavors if you’re feeling adventurous) and whip up this refreshing summer treat just for yourself or even if you have company. It would go so well with a simple homemade sandwich, or by itself to rejuvenate yourself on those oh-so-long super tiring days!

How To Consume Fewer Carbs In beer?