Peroni beer is a product from Birra Peroni, one of the most iconic beer brands in Italy. It has a widespread reach in more than 70 countries all over the world. Peroni is one of the original Italian lagers with a worldwide presence and topmost recognition.

The company has two main brands – Peroni Beer (original) and Peroni Nastro Azzurro. Both of them are well-known and top brands in Italy and worldwide. The beers are famous for their drinkability and freshness.

Keep reading as we share details about these lagers, their origin and much more.

The story behind Peroni beer

It all began in 1846 when Francesco Peroni started his brewery located in Vigevano, Italy. At first, he created a pale lager by using malt, barley, and maize, which was a big success.

Almost two decades later his son Giovanni Peroni started another branch in Rome that was around four years before Rome became Italy’s capital.

By the late 19th and the early 20th century, the brand was recognized as one of the prominent brewing companies in Italy with its products delivering high drinkability. 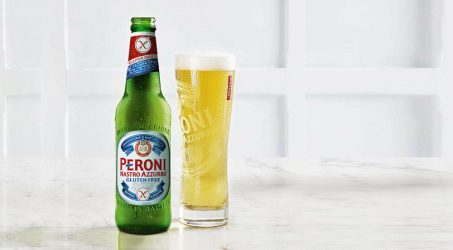 After the Second World War, they launched a premium export lager and named it Peroni Nastro Azzurro. Soon the beer became a hit and is today one of the best beers in the world.

Till today Peroni follows the original recipes and maintains the quality of ingredients in it. They make sure to give it an Italian touch. Here’s a detail of what goes in the brew.

The beer gets its unique crisp and refreshing taste by barley. The brewers use two rows of spring barley which is of high quality.

The beer gets its light golden color and clarity from the maze grown in Bergamo in northern Italy. They are called ‘Nostrano dell’ Isola maize, grown particularly in a stretch of land called “the island between the earth”. Moreover, the maize is of high quality and is one of the key ingredients.

The light bitterness in Peroni beer is a result of the use of two different hops in it – Hallertau Magnum and Saaz-Saaz. Both of them come under Noble hops considered as the most classic ones. Furthermore, they also add a subtle citrusy aroma to the beer and a light finish.

For a smooth taste, the brewery uses ‘soft’ water which is quite low in carbonates.

Peroni original is the one made by following the traditional recipe since 1846, mostly to suit the Italian palate. It opens up with a fruity taste and floral notes and finishes with smoothness and a clean after taste.

There is a perfect balance between the bitterness and sweetness in the lager. The lager is quite crisp, citrusy and spicy too.

The beer is quite light and refreshing, made in the modern international lager style. It has an italian touch too. Moreover, it contains spring malts, hops and corn grits which give it a unique taste.

A premium brand by the brewery this one’s famous all over the world. ‘Nastro Azzurro’ means ‘Blue Ribbon’ in Italian.

The name honors the Blue Riband, a prize awarded to the ship that could cross the Atlantic Ocean in the least possible time. The Italian ocean liner SS Rex won the award in the year 1933.

The beer belongs to the category of European pale lager and has a clear bright golden color. It has been brewed following the original recipe since 1963 in Italian style. On the international bittering unit scale it scores 24 which is mild.

The lager was an instant success after its launch but after the brewery’s acquisition by SABMiller, the beer became popular worldwide. The brewery’s goal was to make a beer perfect for the warm Mediterranean climate.

The beer has a crisp and refreshing aroma and opens up with a fruity taste. It has a smooth finish with a clean after taste. It has no doubt a unique and distinctive flavor.

This premium version is a bit more alcoholic as compared to the actual one but is on average when compared to other beers. It is 5.1% ABV. The lager was crafted in a typical Italian style for the Mediterranean palate.

Other brands by the brewery

Sitting at a beautiful location in Italy like the Amalfi Coast or Lago Maggiore and trying to enjoy the view without a beer? Sounds dull and boring, right?  So now when the next time you visit Italy, do try out Peroni beers, it will certainly add stars to your experience.

How much does a bottle of Peroni beer cost?

What type of beer is Peroni?

Peroni is an Italian pale lager made by corn, hops, and malt.

Is Peroni beer a lager or pilsner?

Peroni is a pale lager with origins in Italy.

The beers from Peroni have an alcohol content that ranges from 4-6% which is at an average, so some of them are very light and some are mild too.

The ranges of beers that fall under Peroni are all low in carbohydrates.