Pappy Van Winkle, the bourbon royalty and the most cherished whiskey worldwide, is the best known and demanded its quality.

Pappy Van Winkle is one of the famous bourbon whiskey brand owned by the Old Rip Van Winkle Distillery Company. It is considered as one of the finest bourbons in the world. Even after so much demand, is hard to find due to its low production annually.

Here are some important facts that help you know more about this most demanding whiskey. 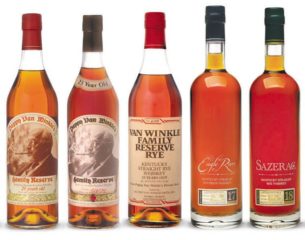 Are you the one who usually remain impatient to find the Pappy Van Winkle bourbon? Of course, you find its taste savory. But apart from its taste, do you know anything about this whiskey. Stay on the page and get to know some of the most interesting facts of the drink.

This drink birth goes back to the year 1893 when Julian “Pappy” Van Winkle sold whiskey for W.L Weller. This makes him the president of the Stitzel-Weller Distillery. But soon the distillery hit a hard time and sold it. Later Julian Van Winkle III started buying the barrels of bourbon and canning it as Old Rip Van Winkle.

Even after so much popularity and demand, the company releases only 7,000 cases in the year that is approximately equal to 84,000 bottles. The distillery runs with a unique motto- “at production if we can, at a loss if we must, but always fine bourbon.”

The Pappy family always wants to spread the taste of the drink to maximum people. For this, they listed the old Rip Winkle Distillery on the website. Although the stock is always limited they tried hard to make the things as much possible as they can.

Since the drink is under great demand and has the least productive in a year, its bottle goes for thousands of dollars. In some of the bars in New York, the drink is sold for $145 shots.

Gilbert and Julia Custsinger stole $100,000 in whiskey from 2008 to 2015. This corresponds to 17 barrels of bourbon and 20 cases of Pappy Van Winkle. But when the bourbon was founded in the year 2015 much of the bourbon had to be destroyed.

Since the bottle is hard to find and in this high competition the government in the state of Ohio set the lottery to offer the best way to provide a bottle to the whiskey lover.

If you don’t find the Pappy, then don’t get disappointed as Julian Van Winkle comes with the best alternative for you all. During an interview with GQ, he suggested some best drinks like W.L. Weller, Maker’s 46, Four Roses single barrel, etc.

The craze for the people did not increase until 1996 when the Beverage Testing Institute rated the drink 99 out of 100. This made the drink the highest rating drink.

Unlike other bourbon drinks, Pappy Van Winkle has a higher percentage of wheat. Unlike this whiskey, another bourbon variety contains 51 percent of corn. Also, Pappy used a typical rye that enhances its taste and makes it sweet and fruitier.

It takes 53 gallons of whiskey to make three gallons of Van Winkle 23. Since the producer has to wait for almost two decades to sell it, the drink is left with the least volume of what is called “angel share.” This is the biggest reason why whiskey is hard to find.

The Pappy Van Winkle released date was the most anticipated and therefore it is referred to as Pappy day in Kentucky. During its release, every state was allocated with a certain number of bottles and the little was allotted to London and England.

This was because the company did not want the brand to make its way to the good homes rather than the high bidder who just want to set the bottles in the collection shelf.

The best tips to experience the drink taste and effect are to drink straight on the rocks with a little volume of water.

This old Rip Van Winkle 10 year Bourbon is the youngest among all other varieties of Winkles. The drink is prepared using a splash of well-water before canning it.

This helps in preparing smooth whiskey and to it close to barrel proof. The aging in 100% oak in the drink imparts strong vanilla and toasted wood flavors and gives your tongue the long-lasting buttery taste balanced with a rich taste of caramel and roasted nuts with a spicy finish.

Pappy Van Winkle 12 is a special reserve bourbon that is slightly higher in both age and proof than RIP Winkle 10. Another two years adds smoothness and helps in the production of a more balanced product.

This savory whiskey is the perfect mixture of sun-kissed fruits and dark spices intertwined with caramel and butterscotch.

Are you the rye whiskey lover? You must have tried most of the rye whiskey aged for 4 years or less but this highly appetizing drink having a perfect flavor due to its 13 years aging.

This award-winning whiskey has a taste of toasted oak and vanilla flavors due to the aged charred wood in it. The tangy taste of caramel, dark spices and fruits make it more perfect for the whiskey lover.

A well-aged and award-winning Pappy Van Winkle 15 does not have the highest proof and is ranking at 107 ABV. These bottles come from hand-selected oak barrels and are left undisturbed for 15 years.

This is enough time to introduce the flavor of oak to mellow. Like all other family members, it too has a long-lasting caramel flavor and smoother finish.

This family member of Pappy Van Bourbon earned 99 out of 100 points, this all because of its sweetness and complexity. Its silky smooth mouthfeel glides from dried, spiced fruits to creamy, honeyed oak that makes it the best and tasty Pappy Van Winkle whiskey among all other types.

This is the rarest find variety of the drink that is released annually in small batches. With the rich flavor of browned butter, charred oak, toasted nuts you can greet your senses with something super savory drink. If you ever got a chance try this bourbon whiskey neat to experience its uniqueness.

The strength level of the cigar line is “Medium Plus” and is the perfect pair with bourbon and whiskey. The cigar is popular because of the notes of rye that brings out the perfect flavor of pepper and smoke in the cigar.

The journey of Production of Pappy Van Winkle Cigar

The story of its production dated back to the bourbon-barrel-fermented cigar in Kentucky, USA. It is produced using Kentucky seed and tobacco grown in the area.

The tobacco leaves are harvested and cured with Kentucky style. The leaves are then shipped from Hopkinsville, Kentucky to Saint James Parish, Louisiana.

Here the tobacco undergoes barrel fermentation. The fermenting uses a carjack that compresses up to 500 pounds of tobacco into a 53-gallon barrel. After perfect fermentation, the product is shipped to the factory in Nicaragua.

Once the process is complete, the cigars are packaged in a custom, ten-count, lined, wood boxes that are ultimately shipped to Pappy & Company. The blended product itself gives the perfect reason for anyone to celebrate.

With all the pleasure, this variety of Bourbon whiskey is the best in taste and class. Experience the best taste with this rarest find whiskey flavor. Find the best variety and do not miss the chance to taste the best tongue savor.

Why Is Hennessy Pure White illegal?

Remy Martin: Why It Is Special and Some Myths

Do You Know About the Calories in Bourbon?