Narragansett beer is a century-old name of success, survival, and love. Narragansett brewing company has a rich history and a long story to tell. Like a legendary hero, the company has witnessed tremendous success, failure and has made a great come back.

If you are a big fan of Narragansett beer you got to know its story and how it has covered its journey from 1890 to till today.

A brick brewing house was founded in 1890. The house was built in Cranston, Rhode Island and here the first Narragansett beer was produced. In the initial year, the company invested 150,000 US Dollar on its startup and bent on to become officially incorporated.

Throughout the brewing company kept on gaining popularity and eventually became the love of New England. In 1914 Narragansett was equipped with a most modern bottling plant in the area and was officially announced as the largest large beer Brewery Company in New England.

Rudolf F. Haffenreffer became the president and chairman of the company and continued to run it throughout his life. The company originally offered a German- lager, an Ale, and a Poter. 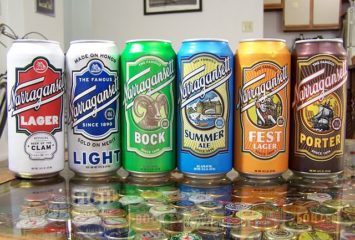 In 1920 to 1933 prohibition was applied in the United States. In this year manufacture, sale and transportation of the alcoholic beverages were legally prevented.

However, the Narragansett brewing company somehow managed to take a license from the U.S. government and continued to sell the product for medicinal purpose. The company was among the only 6 breweries in the U.S. who had the permission to produce beer. The company survived the prohibition period quite gracefully.

Along with the brewery’s classic flavor, it’s wisely selected marketing plans offered the company all the needed support.

To revive the prohibition losses, the company approached a young talented artist Theodore Geisel, popularly known as Dr. Seuss who contributed to creating the “Chief Gansett” character of Narragansett. The company still celebrates his contribution each year on 2 March, Dr. Seuss birth date.

“Hi, Neighbor! Have a Gansett” ad campaign that was started after World War II got quite popular over the public and proved to be a successful marketing campaign.

In 1955 the beer was the no. 1 choice of consumers in New England. The beer was most famous as the official beer of the Boston Red Sox. The drink was featured in American trilled film by the main character Quint the shark hunter as the drink of choice.

The fall of Narragansett beer

After the death of Haffenreffer in 1954, the company wasn’t able to survive for long. It struggled to manage its name till 1965 and then eventually started to lose its flavor and popularity.

In 1965 the company was put off on sale and was purchased by Falstaff brewing company on July 15, 1965, for $17 million in cash 2 million in common stock.

The intention was to keep the brewing running under the guidance of Falstaff though, unfortunately, just two days before the sale, the Rhode Island state government pursued an antitrust case against Falstaff and company suffered through transaction problems.

Though in 1973 Falstaff received the favor of Supreme Court successfully but failed to recover the loss to the company.

After facing back to back legal issues over ownership, the company eventually ended up getting closed officially on July 31, 1981.

Later the production of the beer moved to Falstaff’s plant in Fort Wayne. Yet, it failed to match the original taste and flavor and received only decline and complaints.

All the equipment was sold to China in 1995. Ultimately, in October 1998 the main brewery building including the bottling plant experienced demolition. In 2005 the leftover buildings of the barn which were supposed to be redeveloped are also got crushed.

The comeback of the Narragansett

The Brand Narragansett was revived back by a Rhode Island resident Mark Hellendrung in 2005 in memories “my grandfather used to drink it”. Mark Hellendrung took the reins of the company in his hands. He focused on heritage, local brand, and people to market the brand.

“Every case you buy is another brick in the brewery.” Is one of the statements given by Hellendrung.

Initially, the beer was produced in North American breweries in Rochester N.Y.

In 2011 the company began a campaign “drink your part” which provoked the emotional side of the people and made the locals encourage and come in support of Narragansett’s to get back to Rhode Island.

In 2017, Narragansett beer was brought back to its home state and brewed its first beer with the name “It’s about time IPA”. This day, Narragansett was among the top 50 breweries in the U.S. and ranked 44th from more 6000 competitors.

152 calories in a large can of Narragansett.

What Is Sake Alcohol Content And The Famous Sake Types?