We all have a soft corner for coconut. Yes! But have you ever urged to explore combined drink made using coconut and liqueur together? Let’s get our hopes up because we are presenting Malibu rum today.

It is one of the classic rums of all time. Are you looking for a refreshment spirit this winter? Well! You are on the right page. Let’s say ‘Hello’ to Malibu–the advancement in Carribean rum!

Malibu rum has introduced in 1982 in Barbados. Impressed yet? However, the amazing part is about to come. Many consumers often ask “what is in Malibu?” For starters, it is made of coconut and Carribean rum. In other words, you can say that it is a sweet version of the Carribean liqueur.

In the local areas of Barbados, it is often acknowledged as “flavored rum.” to the readers’ surprise, the trading, Ie.., importing and exporting of Malibu has quite sphered the international liqueur market.

Tom Jago has introduced Malibu at a world-wide level under the branding of International Distillers and Vintners. Without a doubt, the drink had caught the attention of the broad-spectrum of alcohol consumers all over the world.

Yet, if you are a first-time consumer in the context of Malibu, it is recommendable to know-it-all. It is noteworthy to mention that it is a 42 proof liqueur. But, more often, Carribean rums are 80 proof such as Bacardi 151, Havana Club 3 Anos, Appleton Estate Rum, Cruzan Single Barrel Rum, and El Dorado. Malibu is also one of the lightest Carribean rum with a hint of coconut flavor.

What are the different types of Malibu Rum spirit? 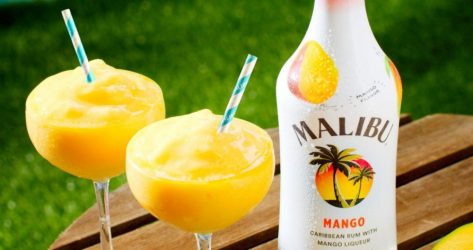 When it comes to Malibu, there are different fruity flavors available. From coconut to mango and lime, there are many alternatives among which you can choose your desired flavor. Let’s countdown to different Malibu rum drinks.

Malibu Black is a 70 proof rum. It carries a hint of sugar cane with its coconut glamorization. It has a tropical mouthfeel. With every sip of this black rum, you can fit your taste buds to bitter rum.

To the readers’ surprise, it is also a very affordable dark rum branded as Malibu. It costs only $20 in the USA. Indeed, our readers would be astonished to acknowledge that various cocktails such as lava flow, strawberry beach, ginger and Carribean sour are made using Malibu black rum.

From research and observation of brand Malibu, it has become quite clear that the craze of Malibu mango is still going on in the alcohol market. That’s right! The name and the flavor of the drink has a unique tone to it. It is a refreshing spirit with the touch of tropical mangoes.

This drink is made using Carribean rum as a base, but you would be astounded to acknowledge that it also contains a coconut flavor. This malibu rum recipe makes mango-flavor, a unique liquor.

Drinks with Malibu rum are quite prominent. You can find Malibu and pineapple recipes on the internet. But, if you want to taste the best, you can try out Malibu pineapple branded rum.

It delivers the nutritional qualities of both coconut and pineapple. You can find it subtly sweet. It remains a perfect refreshing drink in the summer season as well. This malibu rum price is only $16 approx in the USA. It is 42 proof.

On the one hand, all flavored-drinks are original. Yet, this one is special. It is because it is an 80 proof Carribean spirit with coconut liqueur. In the history of international distillers and vintners, it is one of the best selling malibu spirits.

You can enjoy its originality with coconut flavor alone. Some people also prefer Malibu original with Cola because of high-end alcohol content. It costs $16.99 per bottle (750 ml).

Some other prominent flavors of Malibu are:

What are the famous Malibu cocktails?

What can you mix with Malibu coconut rum? As a bartender in Barbados, anyone must be thrilled to answer such a question. Well! So are we. however, with the following Malibu rum recipes, we are mentioning some very famous Malibu cocktails.

To prepare an Afghan Monkey, all you need is:

Recipe: mix all the juices and liqueurs and finely blend using a cocktail glass. Pour cocktail in glasses and present it with whipped cream and a cherry on top.

Note: you can also prefer Malibu pineapple in place of pineapple juice.

It is one of the stoning alcoholic cocktails. It is made with Malibu as the base. You would need the following ingredients to prepare one perfect shot of stoner on acid.

Recipe: Use a cocktail shaker to mix all the ingredients well. Top the drink with ice cubes. Serve in cocktail glasses.

Another amazing Malibu treasure is a lick of sunshine. To prepare it, gather the following ingredients.

Recipe: Pour Malibu coconut rum and pineapple juice in a glass. Mix passion fruit juice in it and stir well. Present your cocktail with pineapple leaf/wedge. Do not forget to top it with ice.

Of course! When we say “tropical” and “lullaby” together, it is something famous and drinkable. Well! Following is the recipe for this amazing drink with Malibu. All you need is:

Recipe: blend all the drinks, mix some ice cubes and top/garnish the cocktail with a pineapple wedge.

Note: you can also use a shaker.

Voodoo is one of the most amazing cocktails that are a treat to the ears, eyes and of course, tastebuds. Here’s how you can make it. Collect some:

Recipe: use a cocktail shaker to mix all the liqueur and do not forget to mix some ice cubes. Serve in cocktail glasses.

Note: Voodoo is a prominent cocktail. If you are ordering one, ensure to ask the bartender to make it using Malibu.

Some other famous cocktails are:

In the context of 80 proof like Malibu original, you can expect a little higher alcohol amount. Apart from this, cocktails or malibu coconut rum drinks can also contain alcohol content of more than 21%. It mainly depends on what other drinks are mixed with Malibu.

How many calories and carbs in Malibu rum?

Malibu rum remains an average drink when it comes to calories and carbs. Carbs in Malibu is 16.3 gram. Yes! It is higher than expected. However, in the defense of this drink, it is noteworthy to mention that juices and sweet-exotic fruits complement this high limit of carbs.

Alongside with this, calories in one fluid ounce of Malibu rum is 51 gram. This is an average calorie limit. It is recommendable to consume one-shot/glass per hour of Malibu on drinking nights. It gives enough time to the human body to adjust with such a high level of calories and carbs.

Without a doubt, you need no heavy foods or snacks to go with Malibu. You can all be clear and pleasured with light snacks like salted peanuts.

No, technically, Malibu rum is not gluten-free. More often than not, cocktails or drinks with Malibu contain some combined/second drink that may contain wheat, barley or grains. Thus, it is recommendable to steer clear of this dark advanced Carribean rum if you are on a gluten-free diet.

Malibu coconut rum and other flavors have become the high-end liqueur that is celebrated all over the world ever since establishment in the late 1900s. The drink mainly compliments the dark and tropical mouthfeel of the Carribean drink. Aforementioned, Malibu is an advanced version of Carribean rum.

Without a doubt, both seem uncomparable, but, it is only because of coconut liqueur mixed with Carribean rum. Believe it or not! Malibu has the greatest brushing up capacity that gives the consumers enough refreshment.

“Get a Malibu and enjoy the ecstasy of any flavor you like, from pineapple, coconut to passion fruit, it is all a package deal!”

Everything You Need To Know About Mamajuana