Do you know one shot of vodka is equivalent to the amount of alcohol you consume in a complete beer bottle! And, if you are the one who wishes to taste of liquor till last of your breath, then you are welcomed to deepen your knowledge related to drinks.

By the starting of millennia, people were more educated and seem conscious of their health and fitness. They were curious to know what is served on their plates and how effective it is for their health.

And, the same rule was implemented on drinks too. People were anxious to know how many ounces in a shot of vodka or whichever drink they prefer on their table.

You might have a friend in you who says that they prefer beer over vodka or they just go for beer and vodka and not for wine or whiskey. And, like them, many other people think that different kinds of drinks whether beer, wine, vodka, whiskey or liquor, have different amounts of alcohol, right?

It’s a common mistake that everyone makes to date, but the truth is, all alcoholic beverages — beer, wine, or liquor, are served at standard serving sizes and are equal in alcohol strength and effect on the body. Now neither you or your friend have the excuse to share their drinks!

According to the U.S. Departments of Health and Human Services and Agriculture define a drink of alcohol as “12 oz. of regular beer, 5 oz. of wine, and 1.5 oz. of 80-proof distilled spirits.”

Moreover, how many ounces are in a shot glass also vary from 0.67 ounces to just over 2 ounces. In the U.S., the shot is going to come in at 1.48 ounces — a nice round number.

Also, according to the report of the National Highway Traffic Safety Administration, Alcohol is alcohol and the Beer has the same effect as straight scotch.

How many ounces in a shot glass? 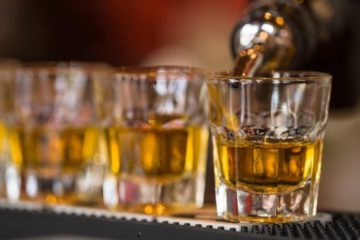 How many ounces in a shot of beer – One ounce of beer contains less alcohol than one ounce of spirits, but the standard serving of beer is a 12-oz. can or bottle.

How many ounces in a shot of liquor – Liquor (distilled spirits) is most often consumed in mixed drinks with 1.5-oz. spirits. Sometimes spirits (vodka, gin, scotch, bourbon, etc.) are mixed with water, club soda, or juice or served “straight” or “on the rocks.” No matter how spirits are consumed, a standard serving (1.5 oz.) of 80 proof (40 percent alcohol by volume) of distilled spirits has the same amount of alcohol as standard servings of beer and wine. So 1.5 oz. x 40 percent alcohol by volume = 0.6 oz. of alcohol/serving.

To understand how many ounces in a shot is decided, let’s understand the different terminology used to determine it?

Do different glasses serve a purpose, or are they just for looks?

Glasses fill extremely specific needs, which is the reason mixed drinks, for the most part, require a particular one. Highball glasses and Champagne flutes funnel the bubbles of soda up to the top, preventing it from going flat.

The wide opening on a lowball glass opens up the fragrances of a mixed drink or soul, and certain forte bourbon glasses guarantee to further upgrade the experience of drinking bourbon.

A few cups are intended to keep drinks hot, similar to an Irish Coffee, while a metal Mint Julep cup keeps the mixed drink chilly.

A Hurricane glass is huge enough to fit each one of those tiki fixings, and a roadster glass carefully holds any beverage that is presented. Whatever you do, maintain a strategic distance from the Martini glass—it’s a clumsy, lesser car that has the right incredible a flame, as we would see it.

That’s why it’s important to know how much alcohol your drink contains.  In the United States, one “standard” drink (or one alcoholic drink equivalent) contains roughly 14 grams of pure alcohol, which is found in:

How many ounces in a standard shot glass and what percentage of alcohol you take?

Even though they come in different sizes, the drinks below are each example of one standard drink:

Each beverage portrayed above represents one standard drink (or one alcoholic drink equivalent), defined in the United States as any beverage containing 0.6 oz or 14 grams of pure alcohol.

The percentage of pure alcohol, expressed here as alcohol by volume (alc/vol), varies within and across beverage types. Although the standard drink amounts are helpful for following health guidelines, they may not reflect customary serving sizes.

You love to take it to your home!

Alcohol Proof Calculator: Estimate How Much Alcohol You Drank!!!

Eggnog Alcohol: A Simple Guide to Explore the Drink!

How Many Cups In A Gallon To Make A Perfect Healthy Drink?