Have you ever wondered what makes your beer so bitter? What brings flavor to it? And what increases its shelf life? It’s the HOPS!

Those green, cone-shaped flowers of the hop plant are not only beautiful but are one of the main ingredients for making beer. You might have heard about hops and that it is use in making beers, but do you know anything else about it?

These plants come in varieties and each one affects the beer’s flavor differently. 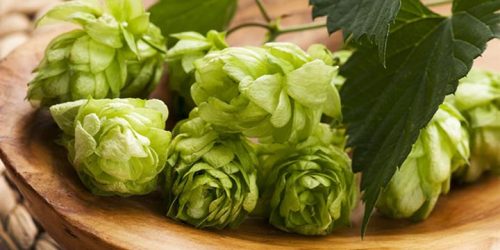 The hop plant’s scientific name is “Humulus lupulus”, which means ‘wolf among weeds’. It belongs to the cannabaceae family and is called the cousin of marijuana. Hops are the female flowering part of the plant, which when dried are then used in brewing beer.

The plant is actually a perennial bine that can grow vigorously up to 30 feet. On an average a hop bine can grow several inches a day, it is grown in strings at fields called ‘hop yards’ by farmers.

Today, almost all the beers brews with hops, but there was a time when beers were brewed without it. Earlier in the ninth century beers were made by three main ingredients – malted barley, yeast and water. Though at some places, the producers added herbs and spices to the beer to differentiate its taste.

In the fifteenth century, hops emerged as a fourth ingredient that added flavor, bitterness, aroma, stability, and depth to the beers. Since then, they are used widely by almost every producer.

The role of hops in beer

The flower of the hop plant contains small glands in them, which has a sticky substance named lupulin. This substance has some essential oils and acids that are responsible for giving the beer flavor, aroma, and bitterness. The market for these flowers is categorized into two – Alpha hops and aroma hops.

Nowadays, beers can’t be even imagined without them, this natural ingredient play multiple roles –

Alpha hops have a higher concentration of alpha acids which adds the bitter taste in craft beers. Malt adds sweetness to the brew and hops provide a balance with the bitterness.

Moreover, they add flavors to it too; different varieties add distinct flavors like floral, piney, spicy, citrusy, Herbal, etc. Without them, beer will taste sweet and dull which is not the classic taste.

These tiny flowers contain properties that fight against unwanted bacteria and keep the beer fresh. They act as a natural preservative and keep the flavor intact.

The aroma hops have a higher concentration of essential oils and low alpha acid in its glands. It accounts for the aroma in the beer which also differs in varieties.

Modern beer drinkers like that of Craft beers prefer hoppier beer because it has a classic taste. In fact, it’s said, “The hoppier the beer is the more valuable it is”. It is now necessary for all beers to carry a value termed as “IBU- International Bitterness Units”.

These units indicate the bitterness in a beer, the higher the IBU more the bitterness. However, there are other factors that contribute to the same and it depends on perception too.

How are they used in beer?

They are used in varying degrees like the IPAs have a higher concentration of hops whereas it is very low in stouts. Brewers add it after the mashing process.

They do it in stages when the brew is boiling to affect the bitterness, flavor, and aroma. Earlier hops were directly added to the cask after fermentation to preserve the beer while transportation. Now they are used at various stages for different effects.

If we categorize them based on geographies of origin, there are three main kinds of hops.

These have origins in Germany and the Czech Republic and are considered the most classic of all. They include strains like Czech Saaz, Hallertau, Spalt and Tettnang and are rich in essential oil humulene that provides high aroma and has low alpha acids. To get a taste of Noble hops you can try Samuel Adams Noble Pils and Bohemian Pilsner Urquell.

Hops that are quite bold, aromatic and bright with origins in the United States comes in this category. They include Centennial, Chinook and Columbus and Cascade (the most popular ones).

They have high levels of essential oil myrcene which gives the beers citrus and pine flavors. For a taste of American hops, you can try Racer 5 IPA from the Bear Republic, ranger IPA, west coast IPA, and amber IPA.

Used in British ales, these hops low myrcene which gives space to other essential oils to provide delicate and mild flavors. When added to the beer it may enhance notes of wood, herbs, molasses, and spice.

They include varieties like Fuggle, East Kent Golding, Pilgrim and target. To get a taste of English hops you can try UK’s St. Peter’s best bitter and quaff Abbot ale from Green King Brewery.

Amidst so many varieties it is difficult to remember each of them. Many brewers use multiple hops in a beer which makes it difficult to identify them. If you want to educate yourself on this matter you can try out the varieties available on the internet.

Plus it is also mentioned on the bottle or can as to which ones are used in the brew. You can start by trying out beers with a single variety of hops and soon you’ll become an expert in recognizing them!

Apart from being used in beers, hops also have medicinal uses. It is used to treat various ailments like anxiety, insomnia, restlessness, attention deficit hyperactivity disorder, and tension. Moreover, it is used to improve conditions like ovarian cancer, cholesterol, and bladder infections.

They are also used in herbal teas, soft drinks, in skin creams and lotion. It is used in food and beverages too for flavor. The extracts from the plant are used to treat leg ulcers, their antibacterial properties are of great use.

Usually, hops are considered safe for consumption in food, beverages, and medicine. Although there are certain warnings and precautions to be considered –

Who can ever imagine a simple flower can do so much? It accounts for all the bitterness, flavor, aroma and preservation properties in the beer plus has so many health benefits too. Hops are no doubt the best, not because we love beers but because of their multiple uses.

Till now you might have thought of noticing the label on the beer bottle, the next time you grab one. Try out finding more about them and tasting them, because there’s a secret world of Hops hidden out there!

Can hops make you high?

Hops have a high sedative power. If you add them in a cup of boiling water and consume it as tea, you’ll feel its hypnotic effect. They relax your mind as alcohol.

Does all beer have hops?

Almost all beers have hops, just the quantity differs. Some brewers add them at a very high percentage as IPAs and some include them in small quantities just to balance the sweetness.

Can you eat hops directly?

Consumption of hops other than in beers can lead to an upset stomach and headache. It is usually recommended not to eat them directly. Moreover, they are toxic to animals.

What beer contains the most hops?

Since they are female flowering plants, hops contain phytoestrogen which is a plant estrogen. They are used to treat a lot of fertility issues too. They might increase the estrogen levels in the human body., but taking them with estrogen pills will decrease the effects of the pill.

Are hops good for your health?

They may help increase the good cholesterol in the body and have some anti-aging properties too.

The plant consists of anti-inflammatory and antioxidant properties. Due to this they are used for various treatments and act as an alternative to pharmaceuticals and are a natural remedy.

This Is Why Elysian Space Dust Is So Famous

Update Yourself With The Knowledge of Puppers Beer