Herbsaint Liqueur has been rocking the alcohol industry for a long time. This proudly-known spirit from Louisiana greets one’s drinking night with far-dreamt pleasantries. Is it any good? Well! That’s out of the question.

More often, in my experience branded and expensive liqueur sometimes fails, however, Herbsaint has changed my opinion recently. In the celebratory new year of 2020, I have come to explore the finest classic liqueurs of all time, a.k.a Hersaint.

This fine spirit is majorly imported to various countries as it’s favoritism has no bounds. Of course, when it comes to spirit, the world seems united. Thus, today at this platform, we are presenting Herbsaint–everything you need to know about!

Are you planning for a small get together? Or, if you are planning for a big-mansion occasion, Herbsaint should be your first choice to serve your guests with the memoir moments. Let’s take a glimpse of what we go for you!

By definition, Herbsaint liqueur is a classic spirit that was introduced in New Orleans, Louisiana back in 1934. The longest-lasting victory of this exclusive spirit has stunned the international alcohol industry.

Currently, the respective branded liquor is mainly manufactured under the guidance of the Sazerac Company. However, the original founders of the drink were J. Marion Legendre and Reginald Parker. Here’s an interesting fact, the founders also introduced the Absinthe the drink was found during World War I.

The drink is an anise-flavored spirit. Anise or Aniseed is a flowering plant that is majorly found in Southern Asia. It contains an edible flavor that makes Herbsaint quite a unique liqueur.

Do you know? In the 1900s, the drink Herbsaint was acknowledged as the ‘Legendre Absinthe.’ Later, the name was changed as the spirit in question had nothing to do with that of Absinthe. 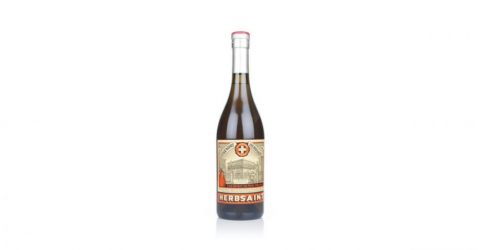 Another reason for such change, I .e.., ‘Legendre Absinthe’ to ‘Legendre Herbsaint’ was the objections taken into control by the Federal Alcohol Control Administration.

As a matter of fact, Absinthe is made up of Grande Wormwood that was illegal at the time in the given country. Thus, the founders of the drink preferred to replace Absinthe with its anagram, I .e.., Herbsaint. In french, it stands for a secret herb. Clearly, Herbsaint liqueur is your secret spirit to keep your suspicious, yet, calm.

To the readers’ surprise, not far from the introduction of the drink, in 1969, the Sazerac Company took over the J.M Legendre & Co. good for Sazarec as the branded spirit has only triumphed in the industry so far.

Not only this, today you can find this prominent liquor distinctive based on proof. Some available proofs of this drink are 120, 100, and 90.

What is in a Sazerac Cocktails?

As you all know, when it comes to cocktails, no one leaves the opportunity to innovate the Herbsaint cocktails. That’s right! These cocktails are eminently known as the Sazerac cocktails. Do you want to make some cocktails using Legendre Herbsaint? Let’s see what recipes we have got for you!

As far as the recipe of the Herbsaint New Orleans is concerned, it’s a secret. Yet, the company clearly labels the Herbsaint alcohol percentage as 45% on the bottle. It is an average alcohol content limit in the context of strong liqueurs.

It is noteworthy to mention that this exclusive drink is majorly complimented by its secret ingredient or herb. Thus, one cannot expect to completely depend on alcohol for its temporary effects.

Apart from this, alcohol consumers who have bodies that are reactive to herbs and medicinal plants must keep a distance for drinks like Herbsaint.

How many Herbsaint calories are there per bottle?

One bottle of Herbsaint contains 12 ounces. Per ounces leads to consumption of 103 calories. Thus, one bottle of this legendary spirit contains approximately 1200 calories.

Yes! The drink is assumed to be a bit heavy as compared to other well-known liquors. For the readers’ information, the drink is healthy and hasn’t shown any side-effects since the establishment. On the side, it is also recommendable to drink 1 glass per hour to avoid unwanted beer-belly.

Are you looking for anise-flavored gluten-free liquor? Herbsaint is your man! That’s right. Now, you can enjoy your Sazarec cocktails with zero gluten qualities. It serves your body with real-time nutritious qualities of fruity juices.

More often, the secretive recipe of the Herbsaint brings suspicion among the consumers. Thus, there’s nothing to worry about! It is because the Sazerac company confirms that this strong spirit contains no gluten.

Recipe: Take a rock glass, pour the bitters and steep the sugar cubes in it. Pour water and set it back until the sugar is dissolved completely. Pour whiskey and ice for chilling the drink.

The top you’re prepared solution with Herbsaint liqueur. Pour the drink in a cocktail shaker and shake well! Pour it back in the rock glass and your high-end Sazarac cocktail is ready to be served chilled!

When you go to Louisiane as a guest, you must treat yourself with a small shot of Cocktail a La Louisiane. What’s more? Follow the given below recipe to make this cocktail for a sunny refreshing afternoon in New Orleans.

Recipe: grab a cocktail shaker and pour all the ingredients except at a time. Shake well. Pour the drink in a cocktail glass and top the drink with medium-sized ice cubes. At last, garnish the drink with cherry set on a needle-pick.

Recipe: take a cocktail shaker and combine all the given ingredients. Shake well. Pour the drink in a fancy cocktail glass and garnish the drink with lemon peel. For summer season refreshment, mix ice cubes or crushed ice.

Some other prominent Herbsaint cocktails are:

What is Herbsaint or Pernod?

This exclusive drink is majorly compared to the other anise-based liqueurs on various platforms. Consumers put their choices and distinctive opinions based on their experience.

To sum up what does Herbsaint taste like? We can say that it is a neutral anise-flavored spirit with no wormwood. For more insights, check out the most common comparisons.

When it comes to Hersaint and Absinthe at the same time, most people confuse between the two. Thus, Is Herbsaint the same as Absinthe? mainly arises.

While following comparison between two, it has become quite clear that the Herbsaint is one of the substitutes of the Absinthe in the context of the main herb, a.k.an Anise.

To the readers’ surprise, it has come out as a stunning fact that the Herbsaint is a light liqueur vs. the absinthe is considered stronger and in various countries, its consumption is also banned.

Another amazing fact is that the Herbsaint does not contain any wormwood, however, absinthe does. As per this history of the drink, the founders had made a mistake of introducing the drink as Legendre-Absinthe. Later, due to the absence of any wormwood element, the name was changed to Legendre-Herbsaint.

In the given two liqueurs, there’s a lot in common. However, you can consider Herbsaint as the American-style pastis. It is because the major ingredient in use for the production of herbsaint is green anise.

For Pastis, the main ingredients are licorice, fennel and star anise. It is noteworthy to mention that the drink in question tastes sweeter than pastis.

Yes! Both liqueurs fall in the category of anise-based liqueurs. However, Pernod contains a high-level of sugar elements such as syrups. But, herbsaint is acknowledged as a subtle drink to make the consumers’ day bright and refreshing.

Why was absinthe banned?

Recently, the United States Government and European Government declared a ban on the use of Absinthe as well as the Absinthe-based liquor. It was due to the discovery of a toxic chemical in the given potion. It is known as thujone. It causes hallucinations, convulsions, and insomnia.

Can absinthe kill you?

As per the medical research, a consumer who consumes an over-the-top amount of absinthe experiences a real-time hallucination and insomnia for a longer time. It can lead to self-harm, depression, or even brain damage.

How do you drink Herbsaint?

Do you want to kick things up a notch? Well! It is time to grasp a six ounces rock glass (yes! The classic style). Pour 2-3 ounces of the Herbsaint in the glass and fill it with ice cubes. Add sugar and syrup on the top. Serve your drink classically among your valuable guests.

What can I substitute for absinthe?

Aforementioned, in the United States and Europe, the consumption of Absinthe is banned. What’s the substitute for it? Well! The alcohol industry has brought you Herbsaint. It is quite a glamorized drink with syrup flavor. It serves your health with non-toxic elements such as anise.

In comparison to Absinthe, Herbsaint is favored because it does not contain any wormwood which is acknowledged for causing hallucination and insomnia after drinking.

What flavor are Peychaud’s bitters?

Are you preparing this A-rated Herbsaint cocktail at home? It is quite clear that the drink is complemented with Herbsiant and Peychaud’s bitters.

The latter one contains a sweet-exotic mouthfeel. This whiskey-type liquor is accessorized with saffron, caramel, and licorice. It remains slightly bitter to keep alive the recognizable qualities of citric fruits.

What is the signature drink of New Orleans?

Herbsaint is the signature drink of New Orleans. From Louisiana to Mississippi, this drink has shelled all the lovers of alcohol in the United States.

The Sazerac company has been credited to taking over such a high-end drink and keeping it running in the international alcohol industry.

Herbsaint Original greets the New Orleans with real-time spirit flavor. Today, over 40% of consumers with favoritism towards the Absinthe have skipped to the Legendre-Herb for taking pleasure in its exclusive anise-flavor without the recognition of wormwoods.

Order Herbsaint online today and enjoy your day with a refreshing Sazerac special rock drink. Check out our website for world-class cocktail recipes for Herbsaint.

“Sazerac gives you confidence, but Herbsaint gives your strength to handle the A-rated spirit with fruity tasting notes.”

What Is Rumplemintz? How To Drink It?

Chartreuse: A Liqueur That Survived The French Revolution