A wise man once said – “Life and beer are very similar. Chill for best results.” And, today we are going to take a look at one of its most famous varieties – Ginger Beer. If you have ever tried it, you would know why we are calling it everyone’s favorite.

In this post, we are going to talk about everything related to ginger beer. Right from its origin to different varieties and brands in which it is available to how one can make it at home. So, without wasting any more time, let us straight away get to those points –

What is ginger beer?

Ginger beer today, contrary to its name, is generally a non-alcoholic drink that has its peculiar strong, spicy and aromatic flavor. Made by using ginger (as it is evident from its name), water and sugar, fermented with yeast, and then carbonated, ginger beer has a long history.

In fact, it seems to have been a popular drink in England during the 1800s. However, at that time it used to be alcoholic, falling somewhere in the category of hard ciders.

How to make ginger beer? 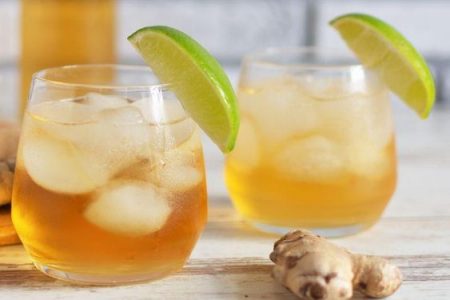 The list of ingredients that you can use to make the best ginger beer at home include:

As the first step in the process, you need to stir yeast into water until it is dissolved. Once dissolved the next thing is to add freshly grated ginger to it, along with sugar and lemon juice. Continue to stir.

Once you have the mix ready, pour it into a large jar and cover it using a towel or a clean cloth. Use a rubber band to keep the towel/cloth in place and place it in a warm place. For the next one week, continue to add freshly grated ginger and sugar to the jar with constant stirring. You will notice bubbles starting to appear after a week’s time.

Once this ginger beer mix is ready, the next step is to create the drink. For this, you need to filter out the mixture that we have created and put it into bottles and water to it. Keep the concentration levels as 1/3rd of the mix and 2/3rd of water.

You can vary this concentration based on the strength you want to keep of your ginger beer. Leave it like this and place it in the same warm place where you had kept it earlier. In a week or so, the yeast would have eaten up the entire sugar. Serve cold!

You might be wondering – is ginger beer alcoholic? Well, most of the ones available out there, commercially, are not. However, there are alcoholic varieties available as well. The recipe that we have discussed above is that of making alcoholic ginger beer, which is going to have an alcohol content of a little less than a light beer.

Now that we have gotten an idea of how you can make this wonderful drink, let us move further to some of the best ginger beer brands:

A highly popular variety that is loved by people all over the world – royal Jamaican ginger beer brings the taste of Jamaica. This pale straw-colored drink brings the aroma of fresh ginger, lemongrass and citrus notes to give you an enthralling flavor. If you like a tangy touch of the ginger, then this ginger beer is perhaps a must-try. Go for this herbed and spiced beer, if you haven’t yet, and you are surely going to fall in love with it!

The second name on this list that we have for you is that of Reed’s ginger beer. One of the most popular brands in the market, Reed’s has managed to carve a niche for itself. Inspired by the Jamaican variety, this fresh ginger beer brings the essence of fruit juices, spices, and honey for you.

Whether you like to use it in cocktails or drink it straight up, it’s perfect both ways. Perhaps this is the reason that it is such a famous drink worldwide!

Popular for continuing to brew its drink the old school way, Bundaberg ginger beer is a must-try. What makes this drink unique is that it uses real ginger grown only in Bundaberg region of Queensland, Australia from where it derives its name. This alcohol-free carbonated drink is perhaps the most loved one available out there. The drink brings with it a legacy of more than five decades.

One of the famous alcoholic varieties of ginger beer, Crabbie’s ginger beer comes with a 4.8% alcohol content. This Scottish beer brand is famous for its wines and whiskies, but its ginger beer is one of the most cherished drinks globally as well. It started production of ginger beer way back in 1801, and continues the legacy even today. You can even try out their raspberry flavor in this drink, which is quite unique and one of a kind.

If you are looking for a unique flavor and an amazing blend of taste, Fever-Tree Ginger Beer is something you must try. What makes it stand out is the fact that it utilizes ginger varieties from three different regions i.e. from Ivory Coast, Cochin, and Nigeria.

Highly acclaimed by critics as well as gastronomes, Fever-Tree is an award-winning variety of ginger beer that has won huge accolades for its taste and unique flavor. Hence, you cannot afford to miss out on trying it!

For people looking to try out a good old handcrafted variety of this brew, Rachel’s ginger beer is perfect. Coming to you straight from Seattle, it is crafted using fresh lemons, organic sugar, and ginger, of course.

It is the simplicity in brewing this beer that makes it so good. In fact, it is one of the most common varieties of the drink used for making those tangy cocktails that everyone loves to sip.

Next on this list is a variety known to be a stormy and perfectly balanced option. This beer is strictly used for making cocktails that are dark. If you have consumed Moscow mule, perhaps you already have had a taste of this amazing ginger beer.

In fact, it is often touted as the best ginger beer for Moscow mule. Non-alcoholic but still powering a punch of flavors, Gosling’s beer is perhaps one of the most recognized verities of ginger beer in the market today.

Last, but not the least, on this list, is a ginger beer produced in Bermuda. Traditionally consumed as a soft drink, Barritt’s ginger beer is also used as a mixer in a variety of cocktails.

Also known to be a zesty drink, it has been in production for more than a century. Often touted to be the best ginger beer available, Barritt’s is a must-try for anyone who is looking to get the real flavor of a traditional ginger drink.

These were some of the top brands of ginger beer. Although there are countless other names that you might get when you search for the same, these are the ones that stand out for their taste. So, if you are interested in trying ginger beer for the first time, you must give these names a consideration and then build your taste from there.

While this drink is looked upon as just another refreshing beverage and sometimes even as a soda, the reality is far from it. In fact, a number of times people ask this question – why drink ginger beer when it’s just another type of soda? Or is it? Is ginger beer good for you? If it is, then what are the benefits of ginger beer?

Well, we are going to answer those questions for you here:

One of the first benefits of this ginger-based drink is that it boosts your digestive system. There have been studies conducted by Memorial Sloan Kettering Cancer Center that show ginger beer to improve digestion in people.

In fact, it has also been shown to play a role in mitigating health problems such as stomach irritation, and other related discomforts. Therefore, if you are looking for a healthy drink to take care of your digestion, trying out ginger beer is not a bad idea.

The second health benefit of ginger beer is that it provides relief from nausea. Thanks to the active ingredient in the drink like gingerol and shogaol, it actives digestive enzymes that play a role in fighting nausea and other similar conditions.

Though not completely conclusive, there has been immense development in studying the role of ginger beer in fighting cancer. As a matter of fact, there have been studies showing positive results.

It has been particularly impactful in fighting gastrointestinal and liver cancers. The active ingredients of ginger, which has been often touted to be a superfood by the healthcare professionals, are seen as the agents responsible for this activity.

Ginger beer has also been shown to play a good role in detoxifying the body. It has been used for detoxification support treatments and has garnered a lot of positive response.

By eliminating the harmful free radicals in the body, ginger beer’s active ingredients can eventually help detoxify and cleanse the system.

Apart from everything that has been mentioned above, one of the most prominent health benefits of ginger beer that have come forward is in promoting mental health.

Since there has been evidence in old scriptures, of using ginger root, in the treatment of mental health problems, there is a huge possibility that it can have the answers to many modern-day mental health challenges, such as memory loss, Alzheimer’s and more.

And a lot more!

The list of benefits that you can get from this ginger-based drink is fairly long and is not limited to just the ones that we have mentioned here. These are just the most prominent ones that have been brought forward and backed by researches. There is a lot more that is still to be discovered. And, the future is surely going to help us figure out many new things about ginger beer.

Whether you call it a refreshing drink to consume on its own, or as a mixer for your favorite cocktail, the reality is that there is a lot more to ginger beer than one can think of. In this post, we have touched all the aspects of this tangy, and impactful drink that you must know if you are a beer lover.

In the end, all we have to say is – don’t waste your life with unnecessary stress. If you like to have the best of your life, you must simply take a chill pill and sip a ginger beer. After all, you only get to live once, so make sure to get the best while you are here on this planet.

Update Yourself With The Knowledge of Puppers Beer