Eggnog alcohol the drink that arises so many questions in the mind of the people actually provide the feeling of squeamishness. The drink is laden with a creamy mixture that most people crave for during their holidays and Christmas.

This famous drink dates to the 18th century and it is believed that George Washington was a big fan of it. It is believed that his drink was prepared using a ton of alcohol for eggnog like rye whiskey, sherry, rum, etc. Also, he uses to include cream, milk, sugar, and a ton of eggs in the drink that offer a delicious taste to the drink.

Considering the general drink, eggnog does contain alcohol in it, but you can find some stuff in the market and stores that provide alcohol-free nogs as well. Since there are many different available drinks and yes there is some homemade eggnog with alcohol as well as without alcohol so there are chances that you can get a special eggnog non-alcoholic drink based on your preference and taste.

What Alcohol Goes in Eggnog?

Enjoying the flavor and taste of eggnog alcohol and wondering what alcohol is in eggnog? 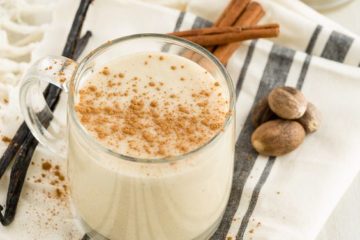 Although there are varieties of alcoholic drinks that are used to prepare the drink, from the past time, many people enjoy the flavor of wine in it. The best alcohol in eggnog found commonly these days are Cognac and Bourbon. It adds great flavor and taste to the drink thus making people fall for it.

Dig Deeper to Know What is Eggnog Made of?

As the name suggests, the traditional eggnog with alcohol contains raw eggs in the drink. But there are some countries like the USA that restricts the use of raw eggs due to health concerns.

Considering the typical ingredient of eggnog alcohol, the list is given below:

The ingredients used to prepare eggnog alcohol are enlisted above. Above all the major ingredient of the drink is milk.

Talking about the other ingredient, alcohol, it is added to the drink to make it alcoholic. Many people wonder what alcohol goes best in eggnog, especially when they are preparing the drink at home. Well, the list is not too long when it comes to taste. Most of the alcohol eggnog consist of the following beverages:

It is best to pick the reasonable, dark, amber-colored spirits with a higher proof. The higher alcoholic content in the drink will impart the neutralizing effect and reduces the sweetness of the eggnog.

For preparing the delicious drink it is essential to take some precautions, especially when you are making it for the first time. Many among you might think of adding alcohol and then eggnog until you get the flavor of your choice. Well, that’ s not a good idea. Since there is a great difference in the two types of drink (eggnog and alcohol) it may lead to the curdling.

Follow the step by step guide to know the eggnog recipe alcohol:

*Avoiding the addition of alcohol in the above recipe will prepare the eggnog without alcohol. Kids enjoy this drink as much as an adult and the drink is the most suitable option to make holidays special.

#7. Waiting Up For Santa Eggnog With Jamaican Rum

The blog above might have aware of what kind of alcohol goes in eggnog and helps you to learn to prepare eggnog with alcohol recipes.

Having your recipe in mind with eggnog and alcohol, feel free to share it with us in the comment box below!

How Long Does Alcohol Stay In Your Urine?

Alcohol Withdrawal Symptoms: What Everybody Ought To Know About?

Understand What Wernicke-Korsakoff Syndrome Is?