Do you love the taste of whiskey and often include the drink in your evenings during the weekend or special occasions? Even after its appetizing taste you often remain confused and curious to know is there carbs in whiskey? The thought makes you think about the effect of drink on your body.

If such are your concern, then here we are with the complete information of carbohydrate percentage and the health benefit of drinking it occasionally.

Since too many of something is never good for your body and mind, the same goes for alcohol as well. But including the different types or the favorite whiskey is never a bad idea. Instead, there are some hidden health benefits of the drink if consumed in the right amount.

Know The How Many Carbs In Whiskey

Whiskey is included under the drink category with the least carbs in it. It is a distilled alcoholic beverage made from fermented grain mash and aged in a wooden cask that provides distinct brown color and flavor to the drink. 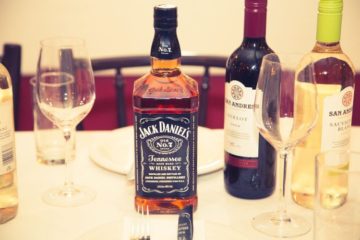 Even though many varieties of whiskey are prepared using grains like corn, wheat and rye still it has only 0.1 g of carbs in it and is gluten-free. This much carbs in whiskey make it popular among people. With the least carbohydrates, there are many health benefits associated with the drink.

Whiskey, the gentlemen drink is loved by all due to its fine taste and smoothness. But are you aware of the different types of whiskey and carbs in a shot of every type you tasted till yet? Here we are with a brief description of all the type with the nutritional information.

Drinking scotch and enjoying its earthy and smoky taste but do you know how many carbs in scotch whiskey? With around 78 calorie the drink has no carbs in it. Thus, it is perfect to enjoy your evening without any fear of adding sugar in your blood.

Whiskey made with the yeast-fermented grain mash and aged for three years in wooden cask has a smoother finish. It is loved by many as the Carbs in Irish Whiskey is 0 g with a calorie intake of 97 Cal.

A distilled American Whiskey made from corn and aged in charred oak has a sweet and bit smoky taste. The sweet taste of the drink is due to corn and has no link with the sugar as there are no carbs in Bourbon whiskey.

Rye Whiskey made with the mash of at least 51% rye and stored in charred barrels for two years. Carbs in rye whiskey are 0.0 g and the drink has a fruity and spicy flavor. It is the most preferred whiskey for making cocktails.

One of the most flavored whiskey a specialty distilled spirit with the most carbohydrate percentage. The carbs in Fireball Whiskey is 38 g with 108 Cal energy.

Let’s no some health benefits of drinking Whiskey

Its role in improving different health conditions made the drink a medicine rather than a liquor during America’s Prohibition in the 1920s. Later, it was sold in pharmacies as a tonic to help people get relief from a certain health condition.

The drink with no carbs and no sugar proves to be highly effective in weight loss. Drinking it helps people curb their appetite thus keep them away from munching unhealthy snacks. Also, since the least carbohydrates in it is one of the best choices for a diabetic person.

Drinking alcohol in a moderate amount protects the body against Type-2 Diabetes. So, if you are going to prepare a diet chart, you can include your favorite whiskey on the list without any doubt.

Most of the health issues arise from the stress and worries of our work, targets, finances and a lot more. Directly or indirectly a healthy mind drives a healthy body.

Drinking whiskey found to be useful to cope up with the stressful situation and help you keep yourself in a healthy state until and unless you make it your habit. Keep the level of whiskey less to reduce your stress.

A shot of whiskey a day can keep the stroke away. Generally, the stroke occurs when there is any blockage in the blood flow. A clot in the blood vessel in the brain is the major reason for Ischemic Stroke. Drinking whiskey continues the flow of blood without any blockage thus prevent you from severe strokes and attacks.

Most of the people nowadays often remain worried about their cholesterol level. But there is good news for those who love to drink liquors like Whiskey.

The drink increases the level of good cholesterol, HDL that keeps checking on the bad cholesterol thus keeping your body fit and healthy.

As mentioned in the previous point, that whiskey help in keeping the level of bad cholesterol in check, thus it plays an important role in keeping your heart healthy as well.

Apart from this, drinking whiskey boosts antioxidants that prevent coronary heart problems. Consuming whiskey once a week can keep your heart young and pumping healthy blood.

Ellagic acid in the aged whiskey has good antioxidants properties. Also, the whiskey prevents the formation of free radicals, thus inhibits the growth of cancer cells. In short, the drink is highly beneficial in fighting against cancer. To reap its benefits against cancer, it is highly recommended to drink a single malt.

Does your daily stress and workload weaken your memory, then here we are with some great information for you especially for the drink lover? Drinking whiskey is directly associated with improving memory and reducing the chance of dementia.

Since the drink contains antioxidants it helps the brain to work powerfully and in retaining information. Also, it is effective in reducing plaque that causes Alzheimer’s, thus keep you safe from such attacks and memory loss lifelong.

As already discussed, whiskey is rich in antioxidants thus helpful in increasing lifespan and fight against the sign of aging. So, a sip or two keep your skin healthy and help you see the world for many more years. Stay young stay healthy with the shot of whiskey.

Most of the time you have heard doctor suggesting whiskey to the patients. Well! The doctor is not a moron. Of course, holding degrees and having the experience he knows how the whiskey prepares your body fight against diseased.

The antioxidants in the drink make it valuable to boost your immune system thus keep diseases away from you.

Whiskey is really good for a sore throat. Mixing whiskey with warm water and honey is the best mixture that helps you in soothing your sore throat. The alcohol in whiskey works as an antiseptic that does a great job as a numbing agent to cure the aching tonsils. So next time you feel pain in throat tries this remedy to get instant relief.

I hope the blog helped you in clearing the doubts related to drinking whiskey. Next time you plan your weekend with this liquor enjoy every single sip and reap its benefits.