From television to real-time bar moments, Capriccio Sangria has become a classic alcoholic beverage. You walk into a bar and you order your first Sangria, it’s your first move to a healthy choice of wine. The fruitful packing of the drink says it all. In some way, this bewilder drink comes out as sweet and exotic. That’s right, this spirit is neither light nor strong naturally. However, consumers prefer it over any other old barreled and hefty spirit.

In this blog, you will learn about this famous spirit and why you should make it your first preference. If you are going to try this wine for the first time, I may warn you, there are going to be some bombshells.

It is a well-built branded red wine with a touch of chopped fruits. It is an appalling fact that after the introduction of this sangria, people went crazy over this drink. Well! That’s a story for later. This drink has recently introduced in 2014 in Spain by Florida Carribean Distillers. Hence, it is called the original taste of Florida. 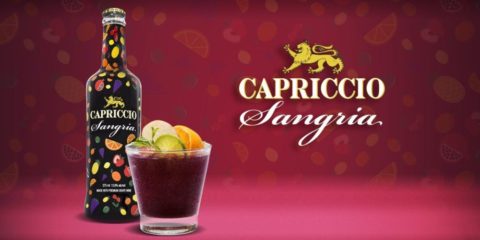 To the reader’s surprise, Bubbly Sangria was an overnight success. It is one of the flavors of the respective wine. It had gone viral on the internet where people claimed that it is making them feel the ecstasy of alcohol. Yes! You got it right. It is average-ABV level Sangria with abilities to help you enjoy the mixing of alcohol. That’s rare!

What are the different flavors of Capriccio Sangria?

There are four main flavors of Capriccio, these are:

This is a fruity wine punch beverage. This flavor of the brand Capriccio was introduced in 2014. It had gone viral overnight. It is noteworthy to mention that over the internet, people shout out to Capriccio branded wine as “the next Four Loko.” This is because of referring to a drink in the past that had also gone viral in 2010.

It is also called Sparkling Sangria. It mainly contains premium grapes wine, flavored juices of fruits and other natural qualities of the main flavor like pomegranate, strawberry, beets, and spring veggies.

Note: Bubbly Sangria contains mixed fruits and hence, its flavor is more unique and strong as compared to others.

Sangria gets appreciation in all its glory. However, consumers compliment this white flavored Capriccio for its bold mouthfeel. That’s right! It is something new and specific with a hint of natural fruit juices.

Order your Capriccio White Sangria, it is served in rock glasses with ice rocks and give you a crispy savor to calm your thirst.

It is a summer wine to keep at the side of your barbeque. It calms your appetite and serves you with exotic taste buds. It contains pomegranate, orange, pineapple, and grapes. It is a perfect light drink to get you through your dietful day.

This drink has styled to give a crispy and lively mouthfeel to the consumers. It is reddish-orange in color. It is sweet in flavor. You can consume this drink in any weather. Especially in summers, it goes wild in the United States. It mainly contains fruit punch, wild strawberries, spring veggies, and pickled beets. This combination makes a perfect appetite to wine every afternoon.

The overnight success of the branded Spirit

As mentioned earlier, the success of this drink was overnight. In the history of the alcohol industry, none of the brands have confronted with such big and unpredictable moves. And of course, all the credit goes to Alberto De La Cruz and his family who owns the Florida Carrabean Distillers since the 1900s. Indeed, it is an amusing fact that the company’s sales had grown by 370% overnight. One of the greatest moves that the company has made to push the success of their new drink is a social media campaign.

The first user on the night to tweet about this drink said: “NO MORE FOUR LOKO STORIES, ITS GON BE CAPRICCIO STORIES THIS SUMMER.” Apart from the social media campaign, 100 percent of social media users claim the drink to be stronger than any other drink. That’s correct! People experienced intoxication. However, it was a harmless level because the drink’s ABV is quite low for you to wake up on the kitchen floor.

As compared to the original LOKO drink that has gone viral in the past. The country has no reason to ban it. It is because LOKO had found to contain caffeine that had proved to be harmful to the consumers. On the other hand, it is only a red wine punch with an equivocal of fruits. Hence, it is healthier than any other Florida’s wine.

What is Capriccio Sangria ABV?

Alcohol by volume ensures the safety level of any alcoholic beverage for consumption. The same rule is applicable to the Capriccio. Of course, anything beyond the limit can lead to severe damage. Hence, it is recommendable to drink this flavoured wine slowly and give enough time and energy to your body to digest it. Its ABV level remains 13.9% for all flavors.

Thus, whether you are choosing bubbly flavour over white, its safety level remains the same. It is significant to note that sugary content like natural fruits also plays a part in the drink. Consumers who do not handle sugar with much conscious may find this drink stronger. As a matter of fact, it is a light abv leveled wine as compared to any other wine worldwide.

How many calories in one bottle of Capriccio Sangria?

Do you prefer a low-calorie beer over a high-calorie wine? Well! You need not do this anymore. Because we are presenting, Capriccio branded wine. It contains calories less than a pint of beer. One bottle of this wine contains 225 calories. It is less than calories in a strong beer. Of course, fruit juices complement this level of calories. However, this wine helps to control over extended appetite while drinking. Thus, it is all even!

When it comes to wines, the more prominent they are, the less affordable they become. However, that is not the case with Capriccio Sangria. In the US, this Florida wine punch’s price for 375 ml can is between $2.49 to $3.49. Similarly, a 750 ml bottle costs between $3.99 to $9.99. Price differentiation may exist due to different import, export, and taxes in different states.

As a proven fact, vodka contains wheat, corn, and barley. Thus, you may never know for sure whether your sangria contains gluten. One way to find out it is checking whether it contains wheat vodka. To avoid gluten qualities in your Sangria, choose a sangria made using corn vodka or barley vodka.

What is Capriccio Sangria 4 Pack?

When we hear “4 pack.” The first thing that may come to mind is the “small party pack.” If that is what you think Bubbly Sangria 4 pack is, then, you are right. You can make your night out with friends much wilder. Just add a four-pack to your trip plan. It is the best spirit substitute to drink the night away without going through any memory losses.

Apart from being best in quality and quantity, it is also quite an affordable alcohol beverage small party pack. It costs $13.99 in the US. It gives you the fine opportunity to take pleasure in the sweet-exotic flavor of alcohol. It is a perfect refreshment.

Criticism against Capriccio brand of Florida

Among all the chaos of going viral overnight, Capriccio brand confronted criticism from consumers over the internet. The consumers claimed the drink does not include any given natural flavors and it is grape wine. Indeed, some consumers confessed that they could not even finish one bottle before they start throwing up. However, we would say that every drink has its ups and downs. You might not have loved the taste and impact of vodka for the first time. It gets better with time. Thus, go for it. “The original flavour of Florida” is all worth it.

Florida is a bewildered state in the US. Whatever comes from Florida, it is a bombshell. And of course, Capriccio has been one. It has all the qualities that an astounding wine punch must-have. You can order it online. It is recommendable to take precautions before you go for this drink. But, if you have read this blog, you would not be having any surprises on the way.

“Go Capriccio! Order it today and experience what’s better than LOKO and caffeine. It is a simple touch of fruits and red wine.”