Are you a big fan of beers? If yes, then you probably must know about Canadian beers. Folks living in Canada consume beer more than any other beverage, thanks to the local microbreweries for such massive availability and low prices.

So are you planning a trip to Canada? Or are you in Canada looking for some good brands to try? Maybe you are here on this blog just for some ‘general knowledge’. Whatever may be the reason for your curiosity we are here to help you out with some good Canadian beer brands to add to your bucket.

Surprisingly they are not owned fully by Canadians. They have gone through certain mergers with foreign brands which made them a bulk producer. However, Moosehead is the largest fully Canadian-owned beer company.

A Belgian strong dark ale styled Canadian beer, for a lover of dark beers, this one is a good pick. Unibroue is a popular Canadian beer brand and has launched many award-winning products. This Belgian style ale originated in Les Basques, Quebec in 1997. The beer is brewed with four different malts and four exotics species for 6, 7 and 8 years.

It comes housed in a glass bottle in formats of 341ml, 750ml, and a draft. When poured in a Chalice glass it appears to be dark brown in color with strong off-white foam at the head. The beer has a strong toasted malt aroma with a hint of chocolate and fruits. Moreover, it has a bittersweet spicy taste and a smooth warm dry finish with notes of smoked rum and herbs. The flavors enhances at it warms up; it’s a perfect aperitif for winters.

A deep copper-red traditional pale ale, this one’s much more balanced as well as complex on taste. Brewed with five different organic malt and spicy cascades, it carries an aroma of spices and roasted nuts. This American pale ale styled brew has a bittersweet taste with a wet and smooth finish.

This ale manufactured by the Mill Street Brewery in Toronto, Ontario, Canada is also known as the Tankhouse Organic Ale. Its origin dates back to 2003 in the company’s original distillery. The brew comes packed in a 16 oz can priced at $3.30. It has a 5.2% ABV and contains 248 calories per can.  For someone who likes pale ale, this is a good choice.

A traditional brew by the Big Rock brewery this is an English style brown ale. It has a toasty malty and sweet caramel taste upfront followed by a nutty flavor. The brew has medium carbonation and finishes with a mild bitterness. It is the flagship beer of Big Rock. A 6 bottle pack of this craft beer costs around $31.

This popular Canadian beer has 5% ABV and a mild 20 IBU. It has a light brown colored body and a sweet aroma like that of caramel. The brew comes housed in cans of 355 ml and bottles too. A pint of 500 ml contains 513 calories with 44g fat and 88g carbohydrates. With a balanced taste, this beer can be compared to the Creemore springs beer and is worth a try.

Next on the list is an American amber lager manufactured by Columbia brewery. Brewed in B.C. Kootenays at the Columbia brewery this lager originated in the year 1990. It is a light roasted malt beer that is perfect to drink anytime to quench the thirst. The draught beer uses 4 different malts and North American hops as ingredients that are brewed full-bodied.

A full body draft beer it has a subtle sweet malty aroma and honey amber color with good carbonation. It has a sweet well balanced nutty taste with toasted malt flavors. The American standard lager has 5.3% ABV and rolls down the throat smoothly. A serving of 11.5 oz contains 153 calories with 30g carbohydrates, 8g protein, and no fats. The beer is an ideal pick if you want something light to drink anytime in the day.

Another amber lager with 5.2% ABV, this one’s a product of Sleeman Breweries, Ontario one of the most popular Canadian beer brands. With a deep honey hue, this lager has a bit of sweet taste too. Sleeman’s honey brown lager has a very subtle metallic sweet smell somewhat like roasted nuts and caramel. A honey brown lager is made by fermenting honey along with barley and hops.

When poured into a glass it builds a big off white head which sets eventually leaving a lace of it. Filled with honey flavor this lager is medium-bodied and tastes like sweet toasted corns and gives a hoppy finish. The beer has a mild carbonation and feels a bit creamy and dry in the mouth.

A 12 oz can of this brew contains 180 calories with 18g carbohydrates and zero fats and proteins. Moreover, it comes housed in cans starting from 12 oz that costs $2.5.

A sweet moderately carbonated beer when served cold is a perfect escape from that hot afternoon. This American blonde ale has its origins in Nova Scotia. It has a crystal clear yellow color hue and makes a good off white foamy head when poured in a glass. Moreover, it has a subtle aroma of malts and caramel along with some light notes of grassy herbal hops.

The taste follows the smell with sweet malty taste at the beginning followed by a light hop with no bitterness throughout. However, it is not an IPA because it’s too much watered for that. It is a light lager which does a good job as a starter.

This American imperial stout is all about coffee. If you are a caffeine person then you should definitely give this one a try. It has rich roasted flavors of coffee which is infused at the time of brewing. With a deep black hue, the stout has quite good carbonation which makes thick tan foam when poured in a glass.

Peche Mortel has its roots in Quebec and is one of the best Canadian beers. The brew has an enticing aroma of espresso along with hints of chocolate and roasted malts. The taste is much like the smell, a strong coffee flavor with some dark fruit wisps and dark chocolate malts followed by a hoppy finish. It feels a little creamy in the mouth and finishes dry while leaving a bitterness on the taste buds.

A bottle of Dieu du Peche Mortel of 11 oz costs around $5. The brew has 9.5% ABV which is high as it should be in a stout style beer. Moreover, one bottle of beer contains 220 calories.

Here’s one more Unibroue product among the list of best Canadian beers. Its origin dates back to 1994 in Chambly, Quebec, which was a result of 18-month long research on a unique strain of yeast. The beer was formerly developed by medieval monks which was its original source of discovery. These monks served beer on special occasions.

Later, the brew revived in the honor of European explorers who believed that they found ‘the end of the world’ while discovering North America.  It was the first beer in the American market’s history that was brewed and refermented in the bottle in that period.

La Fin du Monde is a Belgian Tripel and an international flagship brand of Unibroue. It has a golden amber hue and aroma honey, malt, spices, and coriander. The brew tastes mildly hoppy with notes of malt along with fruity and spicy taste. It has a smooth dry finish, the brew balances perfectly between all the flavors. 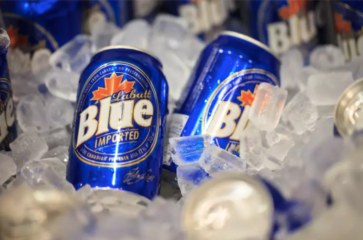 This one’s the best-selling Canadian beer in the world. It originated in 1951 as Labatt Pilsener the lager was later named as Labatt blue due to its blue label. The beer has a fruity character and a mild sweet taste. It has a golden hue with light aromas of pale malts. It is made up of finest hops and Canadian barley malt.

This American adjunct lager has strong carbonation and a smooth dry finish. The beer is brewed by Labatt Brewing Company and is a silver medal winner in the International lager category (1998). Labatt Blue is one of the best Canadian beers with a 5% ABV. Moreover, one bottle of 12 oz contains 153 calories along with 5g carbohydrates, zero fats, and zero proteins. 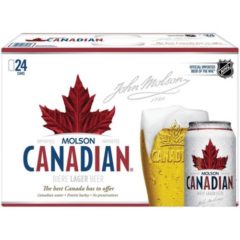 This award-winning lager has a deep golden hue and forms a lasting white foamy head when poured out. With aromas of bread, corn, and honey this lager also has a subtle smell of citrus. It starts with a sweet malty taste followed by a smooth semi-dry finish and leaves mild sweetness on the tongue. It is a refreshing easily drinkable beer with good carbonation and crisp spicy flavors.

There are around 136 calories 11.1g carbohydrates, 1.2g proteins and zero fats every 12 oz of this American adjunct lager. The beer comes housed ins cans and bottles starting from $2.75 for a 473ml can.

Apart from the above, here are other good Canadian beer brands like –

The European settlers introduced beer in Canada in the seventeenth century. Since then Canadians are drooling over beer endlessly. Decades over decades have passed and many new brewers have emerged with many different ways of brewing.

According to a survey, in the year 2013 Canadians spent around $9.14 billion on beers. Beer constitutes 45% of the whole alcoholic beverage sales in Canada. No doubt if someone calls Canada a Beer Nation, facts have made it clearer.

With so many varieties and producers, the list of good beers in Canada will probably not end at this short. however,  we just want to make it easier for you to pick the best of the best.

Each lager is unique in its own way and delivers an enticing experience. So now you have a huge list of top Canadian beers, what to wait for now? Go grab some of them and enjoy your Friday night!