Thinking to try out something different from the usual craft beer? Then you definitely need to add this to your list! A limited-edition beer – Budweiser Copper Lager is all about a sweet nutty taste with a toasted oak aroma. Born out of a collaboration of the two all-American brands – Budweiser and Jim Beam Bourbon, this new brew launched under the exclusive Budweiser’s Reserve Collection.

Why Is It A limited Edition?

Budweiser Reserve Copper Lager collectively launched by the two brands to celebrate the occasion of the completion of 365 years of their business. Moreover, its release marks the 85th anniversary of the Repeal of Prohibition that both the brands successfully survived.

Budweiser is an American-style lager made using time-honored methods and was first introduced in 1876. Jim Beam, on the other hand, is the world’s best-selling bourbon crafted since 1795 popularly known for its oak barrels.

First launched in August 2018, the Budweiser copper lager is a limited edition beer and is not produced anymore by the two brands.

Must Read: Why it is important to be aware of Budweiser Select  Alcohol Content?

What’s so unique in this Copper lager?

This copper lager, brewed with two-row barley and aged on Jim Beam Bourbon barrel staves is one of a kind. Targeted to reach out to the beer and bourbon aficionados, the copper lager is rich honeyed. Budweiser Copper Lager offers notes of caramelized malt, vanilla, and butterscotch along with a toasted oak aroma acquired from the Jim Beam barrels. 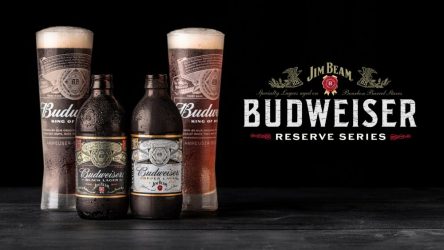 The Budweiser Reserve copper lager has a cute packaging, housed in a small bottle one can drink straight from it. When poured in a glass, it forms a compact off-white foam head and an amber-colored clear body. The lager has a strong scent of the bourbon barrel with caramel and malts. First, it smells like toffee and butterscotch followed by notes of vanilla and bourbon.

A smooth and easy to drink beer, Budweiser copper lager tastes sweet at the tip of the tongue followed by malty and vanilla flavors at the mid. It ends with a smooth creamy grassy hop flavor with almost no bitterness and a good drying finish. The sweetness wears off as it warms up leaving a strong vanilla flavor in it.

The copper lager has a 6.2% ABV which pops out as the buzz hits. Also, it’s quite low in calories and doesn’t feel sticky. Not so heavy and cloying but it does add to the traditional bud which has a 5% ABV.

Budweiser copper lager – Where to buy?

The lager was a limited edition release and is available both online and on physical stores like Wal-Mart. Try to search “Budweiser copper lager near me” on the internet. You’ll find many websites and stores that’ll definitely have a stock of it. A 6-pack lager costs between $6 to $10, which is quite affordable as compared to the other bourbon-barrel beers. With its price, this lager has occupied its space on the shelves very easily.

A great light lager with rich caramel malt and light carbonation, when defined based on drinkability; it’s quite light as compared to those high-calorie bourbon brews. Coupled with some barbeque or any snack on a Friday night, the brew is a good choice to try at least once. The lager has so far received an average rating from its consumers, some said it’s good to try for once and some liked it a lot.

Overall the beer is quite drinkable and offers a toasted malt flavor which entices your taste buds. If you are someone who likes the bitterness in a beer then chances are less that you’ll like it. As for bourbon lovers, this brew offers a good taste that is bourbon dominated and is worth a fair shake!

However, it may not be so appealing to the beer geeks but should be given a chance once because of its limited release, affordability and of course the Jim Beam Barrel factor!

Sierra Nevada Pale Ale- Get Yourself Updated About The Amazing Beer

What Is Sake Alcohol Content And The Famous Sake Types?