Wondering what is a Brass Monkey drink? Here is the complete information for you.

Brass Monkey, a premixed drink was produced by the company Heublein in the 1970s, 80s, and 90s. At that time, there was the availability of a few liquors like beer, wine, and hard alcohol.

At that time, there were the least options for premixed drinks. Introduction of Brass Monkey drink as an alternative to the regular mixed drink makes the drink popular among people in a short period.

Steve Doniger named the drink and its sale increases in the 1980s when the song Beastie Boy song was released with the same name.

The drink disappeared from the market but is recently re-released by the name The Club Brass Monkey. In present, the Club Distilling Company of Stamford is producing the drink. One can easily avail of the drink from the liquor stores where it is kept with other premixed alcoholic beverages.

From Where Does Drink Brass Monkey Come From?

If you are the one born in the 90s then you might be aware of what is Brass Monkey Drink? Although the drink became famous in the 80s but acquire recognition from the Beastie Boys song. They released the song with the same name that makes it popular.

Also, the party drink served up with malt liquor along with the splash of Tropicana makes it famous.

But the credit for popularizing the drink goes to the Beastie Boys.

Here, let’s focus on the origin of the drink. For a long time, it was assumed that the drink was not the mixture of orange juice and beer, but is a canned precursor to Smirnoff ice.

Brass Monkey drink is available in two different kinds. One of them is prepared using the mixture of malt liquor and orange juice while the other is a premixed cocktail beverage. The later was produced by the Heublein Company in the 1970s.

Although there is no perfect evidence, it was considered that the drink got its name after World War II at the popular club in Macau, China.

There are many more stories associated with the origin of the Brass Monkey drink. It is still unknown and difficult to find that who gave the great idea of pouring orange juice into their forty.

There are different stories behind the origin of the drink, but the most important is whosoever uses this idea; it fascinates the drinkers and makes it popular among other mixed drinks.

Is your curiosity is on the peak and you are eager to know what is in a Brass Monkey Drink?

The drink came into popularity after being the part of the song sung by the Beastie Boys, it is the one that stimulates the taste buds of the people with its refreshing and mixed flavor of juices when not many options were available. 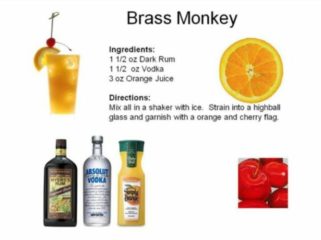 Although this flavored drink has now vanished the simple ingredients of the drink have made it possible to prepare yourself.

Talking about its recipe, let’s first know about what the drink contained in it?

Here is the simple recipe for preparing the light cocktail to refresh your mood.

If you want to make the drink more appetizing you can add Galliano at the top and make it floating by pouring it over the back and forth.

Some try to add some additional flavor to the drink by adding dark rum while the other enhances its taste with white rum like John Berry and Ad-Rock.

Brass Monkey Drink Beer is one of the best versions of the drink that one can try. It is commonly known as Beermosa. The drink is prepared using a perfect combination of wheat beer, orange juice, and bitters.

The unique taste of this beer is because of 50% wheat added into it. This percentage of beer is higher than what is being added to other types of commonly available beer.

Apart from its ingredients, you can have a look at its simple recipe as well. It is easy to prepare. Here are some of the tips that you should follow to prepare the perfect flavored non-alcoholic beer.

Tip 1: Use the pulp-free orange juice. If you are using a freshly prepared orange juice then make sure that you strain it well using a mesh strainer.

Tip 2: It is best to use the chilled orange juice to experience the refreshing taste of the drink.

Tip 3: Since one of the ingredients mentioned above is bitter, ensure that you add the sour flavor that goes best with the sweet orange juice. One of the best bitter knowns is the Angostura bitter.

Tip 4: To make the drink mouth-watering prepare the drink in the large pint glass until and unless you are not about to serve it for brunch.

If you want to make a stronger drink, then you can mix 1-ounce dark rum and 1-ounce vodka in the mixture.

So this is the perfect example of the lighter drink with the essence of orange flavor. Drink Brass Monkey if you want to try something new and unique.

Is Tanqueray Gin A Good Choice of Drink?

Harvey Wallbanger, Last Word, Sazerac: How These Three Drinks Got Their Name!!!