You go to a party and you cant make any sense of all the liquor that your host has so graciously put up. So, what do you do? You choose alcohol’s favorite child- the beer. Let’s try another scenario. You’re back from an intense game of football in the sweltering heat. What do you do to cool off with your mates? You take a can of chilled beer and you gulp it like nobody’s business. The list of scenarios with beer saving the day is practically inexhaustible. But, with a plethora of beer available in the market, how do you decide which one to choose? The answer is quite simple. You look for the beer which has the letter X repeated four times on it and then you look no further XXXX Beer (pronounced four-ex beer) provides one of the best beer that there is out there. 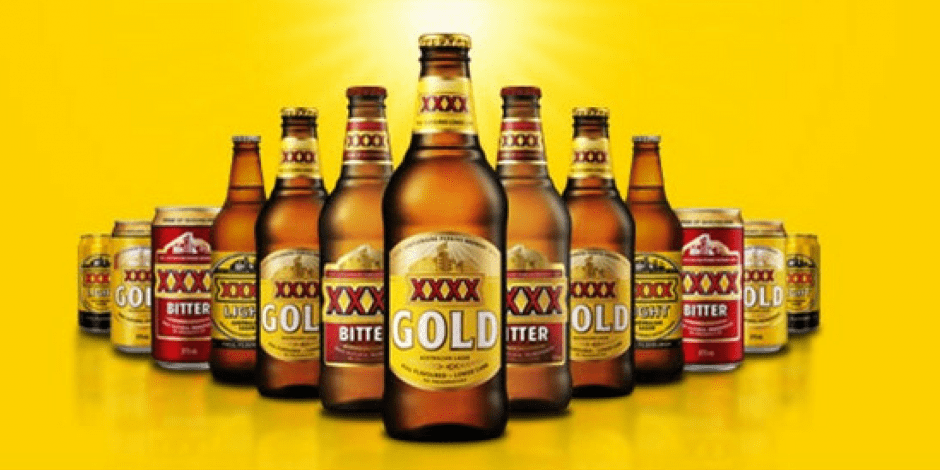 Brewed in Milton, Brisbane by Castlemaine Perkins, XXXX Beer is a brand of amazing Australian Beer. The fact that it is found one-step in pubs and bars in Queensland speaks volumes about its popularity.

Established in 1924, XXXX Beer has sailed strong over the decades. Three different brands of this beer are currently in circulation. These are as follows:

Of the three, the XXXX Summer Bright Lager and the XXXX Bitter beer are full-strength beers while the other is a mid-strength beer. The XXXX Gold Beer is colloquially known as Gold in Queensland.

How Did It All Come About?

Set in 1878, the story behind XXXX is one laced with wonder and amazement. Two brothers Nicholas and Edward Fitzgerald set out on a journey to produce the finest ale that there was.

It was this journey that led them to Castlemaine Victoria and ultimately to Brisbane. On the 13th of September that year, they sold their first beer which marked the birth of the Castlemaine Brewery. Today, this brewery is also known as the home of XXXX Beer.

XXXX Beer as we know today came into existence in 1924 as a result of the efforts of Alois ‘Bill’ Leitner. The recipe that he worked out soon came to be known as the XXXX Bitter and it marked the beginning of a new era in the company’s history.

Everyone who has ever had an XXXX Beer must have wondered about the caricature of a man wearing a boater hat and holding a schooner in one hand that has become the face of the company. Although there are mere speculations about Mr. Fourex’s origins, what we know for sure is that he has become an icon in Queensland along with XXXX Beer.

The year 1991 saw another winning recipe for a beer being introduced in the form of the XXXX Gold Beer which is a mid-strength and a lower carb beer. Over time, it has become one of the most popular beers in Australia.

Our awareness of what we eat and drink has led us to consider facts such as the XXXX Beer calories and the XXXX Beer alcohol content.

The XXXX Summer Bright Lager was a bit late to the party as it was rolled out in 2009. The last to join the XXXX family are its lime variant in 2014 and its mango variant, a couple of years later.

In spite of the three variants have their peculiarities, the XXXX Beers is known throughout Queensland for some of their similarities such as great mouthfeel, a typical XXXX aroma, and the plethora of excuses that Queenslanders give to have an XXXX. But XXXX Beer is not just about the liquor.

This company has a history as rich as its beer. From World War II to the Great Depression of the 1920s, this company has been involved in helping out the masses in a myriad of ways.

As a result, XXXX has become as important a part of the community as any other institution. Karma finally paid off for this company in 1912, when it became the first beer brand to get its island in the picturesque Southern Great Barrier Reef. The XXXX island has even managed to earn the tag of the ultimate holiday destination.