Hey Folks! Looking for something refreshing to get a good buzz instantly? A drink that’s so enticing, Long Island iced tea successfully makes it to the list of top cocktails. So if you were planning to do some chores after having a LIIT, then it’s certainly not possible. Of course, You’ll not be able to even stand up straight after having a couple of Long Island iced teas. One goes after the other, and that continues because it’s really difficult to resist this cocktail.

There is not one particular story of the invention of LIIT. Its past is quite mysterious and messed up just as the drink is. One story involves a man named Robert ‘Rosebud’ Butt who worked as a bartender at Oak Beach Inn, Long Island, New York. Now this man entered a contest in 1972 which had the challenge of making a mixed drink with triple sec. The drink was an instant hit and has evolved a lot since then.

Another origin story dates back to the 1920s concerned with an ‘Old Man Bishop’, a native of Kingsport, Tennessee Long Island community. During the prohibition period when alcohol was banned, some Americans tried to discover cocktails. The bishop claims to invent a drink which he made by mixing tequila, gin, vodka, rum, whiskey, and maple syrup. He named it “Old Man Bishop”. Moreover. The appearance of the cocktail that resembled an iced tea made it easier to sip it in public. 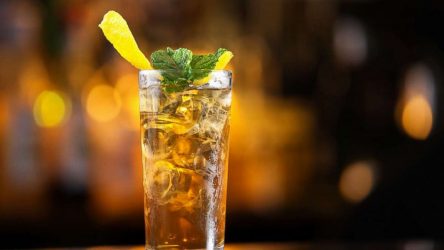 Furthermore, back in the 1960s, Betty Crocker published a recipe of the same cocktail in her cookbook but it has no mention of Robert Butt. However, the ingredients were simple and few. This brings us to the thought of Robert’s claim to be invalid because the concoction was already discovered a decade before. Several stories surround the cocktail and none of it is verified yet.

A Long Island iced tea mix contains five different kinds of spirits and three other juices. Not a much-complicated cocktail though but it does taste amazing. As the name confuses, this cocktail doesn’t consist of any tea in it, its resemblance to an iced tea affects the name.

Equal parts of all the alcohols are mixed. You can take any amount of similar quantities of all the ingredients as per servings. Moreover, the more the concentration of the spirits the higher will be the ABV.

How To Make a Long Island Iced Tea?

If you don’t want to dilute the liquids too much, then just add all the ingredients one by one in glass filled with ice. Top it up with coke and stir.

For a big crowd

If you wish to serve this cocktail at a party, it is important to prepare the pitcher in advance. Leaving the coke, mix everything in a pitcher and chill. When serving, stir the mix a bit and add some ice to it. Pour it into glasses filled with ice and top it with coke. Scaling up this cocktail is quite easy; just multiply 15 by the number of servings which will give you the quantity of each spirit to put in the mix. But better to keep a watch while serving this pitcher, can make your party go out of hand!

This assortment of white alcohols with cola, lime and syrup has a mixed taste. The traditional drink tastes sweet and sour with a slight essence of the spirits and an invigorating flavor of cola. The cola gives it an amber color as of an iced tea. The fact that folks can’t stop drinking it is enough to state how delicious it would taste.

Five alcohols mixed, what else could describe how alcoholic this drink might be. One serving of Long Island iced tea has a 22% ABV. It has higher alcohol content as compared to other highball drinks because of 5 different kinds of alcohol in it, each contributing its best. One can go crazy from sober in just a few minutes

Such a mix of alcohol will have some high calories. One serving makes around 8 oz of the cocktail which carries 136-gram calories approximately. Also, it contains about 33 grams of carbohydrates. Moreover, the major part of these calories comes from the gomme syrup and the cola. Using diet coke instead of the Mexican cola can reduce some of it.

Captain Morgan is one of the most popular brands when it comes to Rum. Manufactured by the British alcohol conglomerate Diageo, Captain Morgan launched a ready to drink iced tea as an homage to the classic drink. The drink is named Captain Morgan Long Island iced tea.

A pre-mixed cocktail made with Captain Morgan’s molasses rum consists of high-quality vodka, gin, tequila, and triple sec liqueur. It has a low alcohol content (17% ABV) as compared to the classic cocktail. It comes housed in a 750 ml glass bottle that costs around $13.

Although it’s ready to drink product it should not be underestimated, with high-quality ingredients in it Captain Morgan never fails to deliver that excellent taste. Just grab a Collins glass and enjoy the mix!

Over the years this famous cocktail has gone under several transitions and many variations are discovered. These are not only more buzzy but also more delicious. Here are some of these variations –

Also called a cousin of Long Island iced tea, this cocktail replaces cola with cranberry juice. This brings out a little tarty taste and reddish color to it.

Abbreviated as AMF, this cocktail contains Blue Curacao instead of triple sec liqueur and sprite or 7UP in place of cola. Moreover, the drink has a bluish color that seems to be very refreshing.

This variation has some Chambord mixed with all the other five spirits. However, sprite is used instead of cola. It has a dark pink color.

A neon textured cocktail, this drink has an additional Midori in it with a splash of sprite.

Those who are not satisfied with 5 liquors, here is an addition of whiskey to the traditional concoction, thus increasing the buzz.

As the name suggests, a peach-colored drink that has peach schnapps as an add on with a splash of cranberry juice.

Well with a unique name this cocktail is made up of sloe gin, cherry brandy, vodka, rum, triple sec and a splash of sweet and sour.

This variation of the Long Island iced tea has amaretto as add on mixed with all the other five alcohols.

There are many more such variations available, try out any one of them when the next time you throw a wild house party. You can make one of your own too. The mix is perfect to serve in a summer party because of its refreshing properties.

A frat party is the best occasion to serve this cocktail in those red disposable glasses. Despite its hangover being very achy to the head, this iced tea remains one of the favorite cocktails just because of its refreshing taste and instant buzz!