Frothy, fresh and fun – Furphy beer, an Australian-made ale, is all these and more. With a local connection to the state of Victoria, the drink is much like a young, fetching debutante at a Victorian-era ball – a complete head-turner! Launched in Geelong, a port city from the Down Under as recently as 2014, the refreshing brand of ale is perfect for those who dread the heaviness that accompanies each gulp of beer. As the brand itself puts it, it’s an “easy-drinking ale that is perfect for a session of yarn-spinning with mates”.

“Furphy” sounds not so much like a name but an incoherent, meaningless sound. But, the roots of the word are important to understand the way it is brewed.

The word was first used for carts of water designed by John Furphy, an Australian blacksmith. These were made of steel or iron and used on farms.

Later, however, the tanks were used by personnel of the Australian army during the First World War in Europe and the Middle East. They soon became popular hangouts for soldiers to exchange idle gossip.

The origin of the word, naturally, is contested. However, the carts became the WWI-era equivalent of watercoolers, and the rumors told at these stations came to be known as “furphies”. 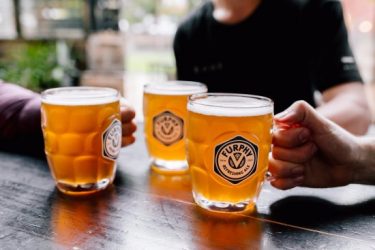 Today, Furphy acknowledges the contribution of John Furphy of Shepparton in making the tanks, without which it claims the brewery would never have been built as they are used to produce the beer.

Furphy, a unique Australian slang, has now come to mean a tall, unbelievable tale that borders on the comical, and the brand itself encourages taking flights of imagination and telling stories while enjoying the drink with some friends!

The New Age reported that the original tank-making company gave much thought before lending their name to the beer-making enterprise that is perhaps more famous than their business today.

John Furphy is said to have been a conservative Methodist preacher apart from being a businessman, which is why the water carts he manufactured were inscribed with the quotation “Water is the Gift of God, but Beer and Whiskey are Concoctions of the Devil”.

Today, the Furphys’ fifth-generation, their nephews Adam and Sam run and guard the business. They have remained successful in preserving not only the famous name but are also steadily contributing towards literature, as a tribute their great-uncle and novelist Joseph, who, unlike his brother, is said to have enjoyed a glass of beer or two!

The Furphy literary prize, a short-story writing contest, has been constituted in honour of the story-telling tradition that the Furphys carry. There is no doubt then that the brand ardently supports “spinning yarns”!

Little Creatures brewery who owns Furphy beer is in Geelong, a city on Australia’s East Coast in Victoria. The beer was originally marketed in 2014 only for consumers in the state and very recently became available throughout Australia.

Little Creatures boasts to be a mini town in its own right, complete with a canteen perfect for a leisurely lunch, a mysterious hall called the White Rabbit Barrel Hall and yet another enigma, the Mystery Lane.

The brewery premises have a cinema hall and markets, all of which set the stage for beer launches. One can also host weddings, birthday parties, corporate events and almost any other function at the venue.

What Goes In A Furphy?

Much like the metal tank, its WWI-era namesake, the beer is made of 100 percent authentic Victorian ingredients. The mouthfeel is crisp, and the flavour a perfect balance of fruity taste and aroma, complete with a continuous maltiness.

The head of the drink (the froth that floats on the top of a glass of beer) is thin, white and nearly negligent. This Furphy review will lend you more insight:

The Furphy alcohol content in the standard-sized drink is 4.4 percent, making it a “session ale” – so you can drink it without gaining too many Furphy calories or getting too drunk!

Packaging: The Furphy bottle flaunts a stunning hexagonal blue label, with a “V” stamped at the center – a homage to Victoria, the state in which it is produced and for the people of which it was originally brewed.

Although everything about the bottle says “old-world charm”, so does the style of the ale, which precedes high ABVs and hop bombs.

Similar tastes: For Furphy first-timers, here are some other beers that taste almost similar.

The beer shares a refreshing, easy-drinking quality with Toohey’s New, which is brewed in New South Wales and became a favorite with the Aussies as early as 1931! It also has a similar clean and crisp finish as the James Squire One Fifty Lashes pale ale with passionfruit and citrusy aromas.

The unique local culture associated with its founders renders Furphy an edge, introducing tradition to the entire experience of mates sitting together and drinking beer while telling stories (credible or not!).

It comes as no surprise then that three years after the beer was launched on a few taps in Geelong, the business grew by 300 percent! This is also the reason why the wildly anticipated arrival of the Furphy was reported and received with much cheer across Australia from 2018-19.

The refreshing ale makes no “furphies” about strong flavors, is easily accessible for a craft beer, and is light on the pocket ($4.59 for a bottle or $19.99 for a 6-pack) – the perfect way to ring in a sunny Aussie New Year!