In 2005, Four Loko became one of the most popular household drinks in America. However, it has been one and half a decade since Four Loko is trying to advance itself in the market. As a consequence, the company launched a neon-coloured Four Loko drink labelled with zero caffeine in 2014. However, the advanced drink did not add to the goodwill of this branded alcoholic drink. The reason being, sensitive drinkers, worry if “caffeine” increases or decreases the Four Loko alcohol content percentage? You will find out by the end of this reading!

To begin with, Four Loko drinks specialize in its series of flavours. It is one of the most-expanded series of drinks by Phusion Projects of Chicago. You will be surprised to know that it had only four flavours during the original launch of the alcohol in the market. And, this is why the drink was named “Four Loko.” But, as the drink’s popularity multiplied in the market like mushrooms, the drink has over 25 flavours running at growth today. In contrast, some flavours like Mango, Orange, and Coco have been discontinued. 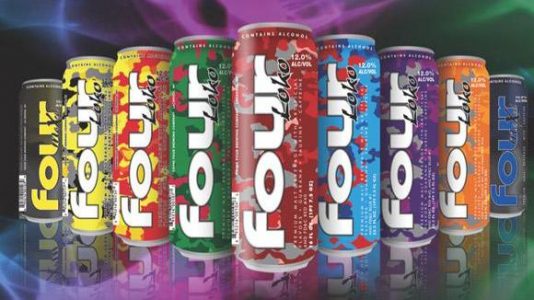 According to the research concluded in 2014, Four Loko’s combination with added caffeine confused the young generation for its accurate alcohol content limit? For the most part, the confusion began when one can of Four Loko mentioned up to 14% alcohol content percentage.

However, the quantity on the label was omitted. Hence, suspicion about Four Loko’s actual ABV percentage rises when one can get the drinkers drunk. Seriously? A single can That’s too negligible!

So, if you are confused too. Or, if you want to examine how much alcohol you drink during consumption of Four Loko’s single can, you are in the right place. Therefore, when you order four loko in a bar next time, you’d know exactly how much to consume as per your surrounding and scenario of the next day:

Presuming that you order one can of four Loko (irrespective of flavour), you can read that the four loko alcohol content percentage is 14% on the label. However, if you view the serving(s) per can, it’s 4 ¾. Meaning, One can of Four Loko is equivalent to approx five glasses of beer. Henceforth, it is pretty logical when one gets drunk after a single can of four loko.

Now, the 14% alcohol content of Four Loko is compromised when you order a less-alcoholic flavour. For example, Electric Lemonade contains 14% pure alcohol. It can hold 23.5 ounces of beer. Meaning 3.29 ounces of pure alcohol.

But, if you pick a less intense flavour like Sour Mango Hard Seltzer, you will see that it has only a 12% ABV percentage.

Here’s a shocking fact for you! One of the main reasons why Four Loko increased its alcohol content value from 8% to 14% is because many alcoholic brands were facing domination by White Claw in the market. Hence, solid beers for summer was a strategy for Four Loko to reclaim its lost attention from consumers.

However, this strategy did not work out well for the Chicago company. Because many critics called four loko “a cheap high” drink, its price list varies from $2.99 to $47.19, depending on the flavour. Four Loko Gold is the most expensive flavour in the market today. But, it does not compensate for Four Loko’s “not-so-good for heath” reputation among millennials and Generation Z.

Why is Four Loko always warned about?

Think about your childhood. Do you see your parents and grandparents drinking Four Loko? Well! It’s possible that at the time, Four Loko was wildly known and loved. However, now that you are all grown up, you may encounter people giving you warnings about Four Loko. Is it a dangerous drink? If you are a hardcore fan of Four Loko, lucky for you because it is no longer a dangerous drink.

There was a time when the Phusion Projects of Chicago decided to add caffeine, taurine, and guarana to this beer. When it did, the world of drinkers was divided into two. Careless drinkers loved Four Loko for its caffeine ingestion. But, sensitive drinkers were well-acknowledged to the harms of caffeine and alcohol (both in one place). Thus, criticism against the drink increased when people on social media started telling their followers about the FourLoko experience.

As a consequence, the team ended up reimbursing its initial version of the drink, i.e.., without caffeine. So, we’d like to inform you that it is no longer a dangerous drink.

Four Loko Alcohol Content is not as per “industry standards”, say State Attorneys.

When a well-known and goodwill company is dragged in the court for denying customers’ requests, it is never a good deal. But, unfortunately, something like that happened on the Phusion Projects of Chicago. Around America, high-school students (legal) were consuming Four Loko because of its best flavour.

However, they were unaware of Four Loko’s single-serving beverage situation. One Can of Four Loko is equivalent to 5 glasses of beer. But, since it was not made clear in the label, the Federal Trade Commission raised a request. Upon Four Loko’s denial, 17 state attorneys argued that industry standards of ABV Percentage for beer are 8%.

Four Loko’s owners reacted by launching drinks with 14% plus ABV drinks in the market. However, failed miserably.

Four Loko is definitely a winner, thanks to its bad reputation in the market. It is human nature; negative always appear more attractive than a positive. Meaning, a cheap high remains preferable over an expensive drink and no high. It feels like drinking carbonated water. We request you to stay safe and drink after being 100% sure of the alcohol content percentage in your drink. Thank you!