If you are a beer lover, you must have heard about everyone’s favorite Blue Moon Beer. One of the top-selling beers in America, it has widely loved and cherished by beer drinkers. As a matter of fact, many people believe that if there is a beverage that resonates completely with the quote – “Beer is a proof that God loves and wants us to be happy”, it has to be Blue Moon.

In this post, we are going to talk about 12 some interesting facts about this alcoholic beverage that you as a beer lover must know. And, if you continue to read the article you will see that we have an added BONUS FACT waiting for you at the end. 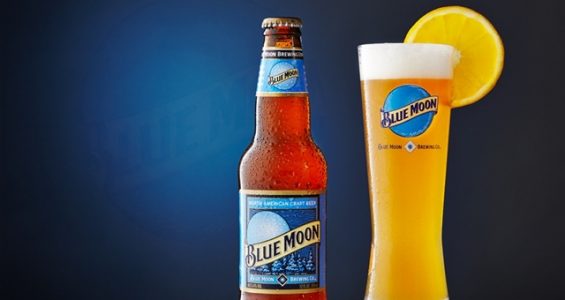 Without wasting too much time, let us straight away jump into those facts and get to know about them one by one –

There’s a lot of confusion about the brand’s identity. In fact, one of the most common questions asked about this brand is – what kind of beer is blue moon?

Considering the fact that it is wheat-ale, popularly a Belgian style beer, people tend to think of it as having its origin in the European nation. However, in reality, it is a completely American beer.

As a matter of fact, it was originally brewed in Golden, Colorado in the year 1995 under the name of Blue Moon Brewing Co., which was originally owned by MillerCoors.

Another exciting fact about this Belgian style brew is that Blue Moon is not its first name. When initially brewed, it was called Bellyslide Wit. However, the name was later changed to Blue Moon, which is popularly known as today owing to it being catchier.

In fact, according to prevalent hearsays, the name is inspired by the saying “A beer this good only comes around once in a blue moon” that was made by one of the beer fans.

Blue Moon was brewed for the first time by Keith Villa, who received a Ph.D. in brewing from the University of Brussels. In fact, Keith, who was a brewmaster at the Sandlot Brewery in the basement of Denver’s Coors Field created it after receiving the degree.

If you ask who makes Blue Moon beer today, the answer is it is still made by MillerCoors. In fact, it is brewed in Canada by Molson Coors, a brewery located in Montreal, Quebec (Canada) and distributed across the U.S. and Europe.

One of the most exciting things about Blue Moon beer is the flavors in which it is available. As a matter of fact, it exists in more than 25+ different flavors and brews, which include some exciting ones like Chai spiced ale, Sunshine Citrus Blonde, Farmhouse Red Ale, and Harvest Pumpkin Ale, to name a few.

Apart from these, the company also offers seasonal brews as well, which include names like Pale Moon Winter Abbey and more.

In the Nielsen CGA survey, Blue Moon was rated as the most loved beer in Oregon and Maryland states, beating state favorites like Samuel Adams Seasonal and Miller Lite. Not just this, it also made the list of top few beers across many other states.

Hence it is quite evident that Blue Moon Beer in the overall review is a highly loved and poplar beer across the entire United States of America.

While there are still people who wonder what type of beer is Blue Moon, the beverage has been winning hearts and awards year after year. In fact, it won the Gold Medal at the World Beer Championship in its category in the year 1995 and went on to again win the silver medal at the same event the following year and in 1997 as well.

Also, the brewery was awarded as the 2008 World Beer Cup Champion Brewery as a Large Beer Company. All these awards clearly reflect the quality and popularity of the beer.

Blue Moon beer is known for its unique flavor. And, the reason for that lies in the ingredients that are used to brew it. There are quite a number of different ingredients used to create this amazing beverage.

According to the brewer, Blue Moon Beer ingredients include white wheat, malted barleys, oats, coriander and orange peel. To accentuate the unique taste, brewmasters recommend that the beer be served with a slice of orange.

Another unique thing about this beer is the varying levels of alcohol content in which it is available. The regular Blue Moon beer has 5.4% alcohol by volume and is easily available in cans, kegs and bottles. However, for states like Minnesota where these beverages are stored in grocery stores, the beer content is a little lesser at approximately 3.2%. It is the same in Utah as well.

Also, the seasonal brews that are produced by the company are also having alcohol content at 5.4%.

Not that it transforms into something else, the fact of the matter is that the company markets Blue Moon in Canada under the name Belgian Moon. Although there is no clear cut reason as to why the company uses this tactic, the most probable reason that one could think of is because of trademark issues.

The representatives from the company have time and again reiterated the same. And, hence it can be said that to stay away from legal trouble the company uses a different name in Canada.

Not many people can actually think of nutrition when they think of a beer. But surprisingly, if we talk about Blue Moon Beer calories and nutrition value, we come across some amazing facts. It pans out to be a highly nutritious beer, with components like potassium, protein as well as antioxidants.

In fact, if we talk strictly about the values it contains 170 calories, 14 grams of carbs, 2 grams of protein and 15 grams of alcohol.

What makes it an exciting choice is the fact that it is available in a wide range of flavors, with varying prices. In fact, the prices range from $13.50 in stores for a pack of 12 beers to $18.50 for a pack of 12 if you are looking to buy kegs. Similarly, Blue Moon beer price for a pack of 24 also varies.

Depending upon the packing and the type of blue moon beer that you intend to buy, you have to pay different prices.

Another fact about the beer that is a must to know is that it is not suitable for people with gluten-allergy, as the beer is made using wheat, oats and orange. In fact, people who are suffering from medical conditions such as Celiac Disease, which is also related to gluten allergy, must also stay away from Blue Moon beer because of its ingredients.

So, if you know someone who has a gluten allergy tell them to not try this refreshing summery beverage.

Involved in quite a number of controversies

Though Blue Moon Beer is one of the most popular alcoholic beverages in the market, the journey has been marred with a number of controversies as well. The first one related to it not being a craft beer.

Another controversy involved the naming of the beer i.e. Belgian White. Confédération des Brasseries de Belgique (The Confederation of Belgian Breweries) filed suit against the company stating that the name was misleading.

According to them, “The name can confuse the buyers letting them believe that it was produced in Belgian.” Though the company initially changed the packaging and started to mention ‘Made in USA’, but it ultimately had to come to an agreement out of court, which led to it being repackaged mentioning it to be a ‘Belgian-style Wheat Ale’.

As you can quite clearly see that there is a lot more about Blue Moon Beer than just being one of the most loved beverages in America and all over the world. The acts mentioned here give you a clear idea of how the brand was started and how it went on to become what it is today.

And, get to taste the real flavor that makes it a highly popular and loved beer brand all across the world.